Though a bit provocative, this headline raises a liminal question on the various projects of Central Bank Digital Currencies (CBDBs): Which  governance will apply to them? Or as Juvenal, the poet in ancient Rome, famously asked, “Who will guard the guards themselves?”[1]

What Is a Central Bank Digital Currency?

A CBDC is the digital form of a country’s fiat currency and, like traditional currency, represents a claim on that country’s government. Instead of printing money, the central bank issues electronic coins backed by the full faith and credit of the government.[2] As a result, for the first time, central banks will accept claims directly from the public.

When Facebook announced its Libra project of creating a “universal digital currency” in June 2019, the company faced forceful pushback from central banks, governments, and regulators. Those entities raised serious concerns over what they saw as the privatization of the sovereign right to issue national currencies. These concerns helped accelerate the central banks’ own efforts, which had already begun to various degrees, to look into issuing their own digital currencies.

Central banks are now issuing regular reports on their progress and, in October 2020, the Bank for International Settlements (BIS) published a report jointly with the Bank of Canada, European Central Bank, Bank of Japan, Sveriges Riksbank, Swiss National Bank, Bank of England, and the Board of Governors of the Federal Reserve, suggesting a growning consensus among leading central banks over how CBDCs would work and be regulated. [3]

The Chinese CBDC Is Purely Domestic

In China, the People’s Bank of China issued its own report on Global Rules for CBDC Monitoring, Data Sharing[4]. Since the Yuan is not fully convertible and the CBDC has only been introduced domestically, it is unlikely to serve as a model and seems designed to give more power to central banks and add finance to the government’s methods of controlling its citizens. Zhou Xiaochuan, a former governor of the Peoples Bank of China, has said that the China CBDC would be utilized locally instead of globally immediately after it goes public.[5]

As Hung Tran at the Atlantic Council has said, this will significantly strengthen the Chinese government’s social credit scoring system, which is used to control Chinese citizens by rewarding or punishing their behaviors. Basically, the more citizens that use the Digital Currency Electronic Payment (DCEP) instead of physical cash, the more the government can monitor and control their lives. This is an important issue for other central banks contemplating digital currencies. These banks must demonstrate their ability to put in place very robust institutional safeguards against potential abuse of digital currency-transactions data. [6]

Mu Changchun, the head of the Chinese central bank’s Digital Currency Research Institute, has said that so-called “controllable anonymity” is at the core of China’s digital yuan design. A completely anonymous CBDC is not an option.[7] 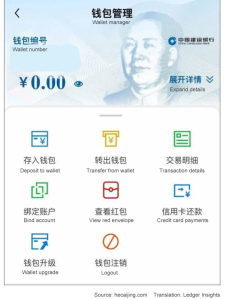 Is It Really About Digital Technology?

There is a fundamental ambiguity in the term, “digital currency.” Let me first address the word digital.

When Libra was launched, Facebook insisted that Libra’s mission was to enable a simple global currency and financial infrastructure that empowers billions of people.[9] Yet the unbanked population of the world is not impaired by the availability of a good mobile application  for payments. They are, instead, confronted by infrastructure problems: lack of electricity, telecommunications or internet access.

What’s more, the digitalization of money is not exactly new. The payments between central banks and the banking sector or the capital markets are already digitalized. Are those payments unsafe? Do they need blockchain? In conversations with teams of several central banks, I have heard them question how innovative the blockchain actually is. Blockchain is a system of recording information in a way that makes it difficult or impossible to change, hack, or cheat the system.[10]

Central banks are quite familiar with digital payments. Yet a CBDC could provide a complementary central bank currency to the public, supporting a more resilient and diverse domestic payment system. It might also offer opportunities not possible with cash while supporting innovation.[11]

If more safety is needed – and it is a constant challenge – the improvement of digital systems is a key maintenance and innovation matter that does not require a digital revolution, but evolution. ConsenSys, a blockchain technology company owned by Joseph Lubin, who is  a co-founder of Ethereum, has already designed a proposed architecture for a successful implementation on Ethereum. [12]

Is It Really About Currency?

Using the term currency (rather than money) creates  an ambiguity by giving the impression that it is another currency. Yet, it is another form of utilization of the same currency. It also implies that each central bank will issue its own currency in digital form. It is amazing to read serious commentators considering that currencies might be replaced by digital tokens. A CBDB is not a new currency.

Central banks have been providing trusted money to the public for hundreds of years as part of their public policy objectives. Trusted money is a public good. It offers a common unit of account, store of value, and medium of exchange for the sale of goods and services and settlement of financial transactions. Providing cash for public use is an important tool for central banks.[14]

Is It About Disintermediation?

While the perception of the CBDC is as a technological breakthrough, the reality is that it is based on the core of what central banks already are. While they stay in control of their national currency, what was initially reserved to transactions between financial institutions and central banks changes nature. The Bank of England’s graphic below illustrates this novation.

While the CBDC expands the money beyond banknotes, this is happening through a digital link between the central bank and the depositors of this e-money. This raises a major question for the future of the banking system.

Deposits by non-banks with the central bank are equivalent to bank deposits. They will be substantial and volatile and deprive commercial banks of the core liability they need to fund their loan portfolios: deposits from the public. 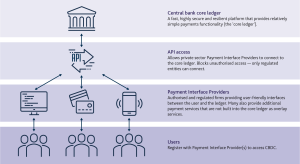 Recognizing this fact is critical, and central banks know it, mentioning it when they discuss the issues they need to look at more closely.  Depending on the design and adoption of a CBDC, there may be broad market structure effects. There is a risk of disintermediating banks or enabling destabilizsing runs on central bank money, thereby undermining financial stability. Today, the public can (and haa in the past) run on central bank money by holding more cash, but such runs are very rare, given the existence of deposit insurance and bank resolution frameworks that protect retail depositors. There is, however, a concern that a widely available CBDC could make such events more frequent and severe by enabling “digital runs” on the central bank with unprecedented speed and scale.[16]

The consequence of this disintermediation is that a level playing field must be found between banks and central banks. It also requires the building of a complex system protecting the central banks from abuse or frauds. Here are some examples of the issues inolved:

These questions need to be answered, and a regulator will be required. It Is high time for central banks leaders to abstain from triumphalist speeches on CBDC until they have found a way to avoid systemic risks and regulatory problems of CBDCs. We are far from discovering an effective approach.[17] These concerns are reflected in the recent guidelines for access of “master accounts” by the Federal Reserve. [18]

CBDCs need to be robust and unassailable. The public debate has been about the forms of digital payment systems while the real problem is the nature of the content of a digital  “wallet” and its design.[19] One could imagine, during a banking crisis, a rush to convert bank deposits to CBDCs, exacerbating the crisis. Should central banks resist these efforts at conversions, a grey market could emerge with a premium on CBDC.

When the ECB announces CBDC as a way to make daily payments quickly, easily, and securely,  fast, , does it imply that the current system is slow, difficult, and risky? As Christine Lagarde, Prpesident of the European Central Bank, has said, the euro belongs to Europeans, and our mission is to be its guardian. Europeans are increasingly turning to digital in the ways they spend, save and invest, and our role is to secure trust in money. This means making sure the euro is fit for the digital age. We should be prepared to issue a digital euro, should the need arise.[20] Crucial to that preparation is finding an effective way to oversee CBDCs. Will central banks be their own risk managers?

This post comes to us from Georges Ugeux, who is is the chairman and CEO of Galileo Global Advisors and teaches international finance at Columbia Law School.