Previous takeover studies document a puzzlingly skewed division of gains between target and acquirer firms. The targets gain a hefty bid premium, while acquirers’ returns are insignificant or slightly negative around bid announcement dates. Thus, the question arises, Why do acquirer managers undertake low-benefit or even value-destroying mergers? In a new paper, I reassess the notion that acquirers aim to create synergies and maximize value through mergers and acquisitions (M&A).

Prior studies typically assume that mergers are unpredictable during the pre-offer period. However, a growing literature documents that private information from merger negotiations leaks to the market, suggesting that some investors anticipate mergers long before the public announcement dates. Partial anticipation can bias merger gains because a part of the total gains can be capitalized around the anticipation time.

My paper proposes a new event-study approach to deal with the partial-anticipation issue.[1] This approach incorporates the alpha (the intercept from regressing the merging firm’s excess returns on the market’s excess return) as a part of the abnormal returns and allows the parameters (alpha and beta) to change with the arrival of anticipation signals. Using this approach, the paper sheds new light on merger gains and reconciles the acquirers’ no-value-creation puzzle.

Comparing the merger gains from the anticipation-adjusted approach with those of the traditional market model, I find that the latter significantly underestimates the gains. For example, the market model estimates that the cumulative average abnormal returns (CAARs) to the acquirers, from six months before to six months after the announcement date, are -10.34 percent. This result is in line with prior findings that mergers destroy acquirers’ value. However, the anticipation-adjusted approach finds the acquirers’ gain during that period is 8.55 percent. Similarly, the anticipation-adjusted average bid premium to target shareholders is 7.9 percent larger. The underestimation persists in various subsamples, suggesting the downward bias does not depend on the terms of a deal, the characteristics of the merging firms, or the sample period. Overall, by controlling for partial anticipation, I find that mergers create substantial value for both merging firms.

I develop a simple model to illustrate why failure to incorporate partial anticipation can bias merger gains. Intuitively, the pre-offer alpha is the product of the likelihood that the merger will occur and the deal’s total synergistic gains. The synergy is usually non-zero, implying that the alphas should remain zero if a merger remains unexpected pre-announcement. This theoretical model predicts that the market model will underestimate the merger gains when alphas are positive, which implies a portion of the gains is realized around anticipation time. The empirical results indicate that the primary source of downward bias is that the pre-offer alphas for both merging firms are significantly positive.

Next, I conduct various tests to investigate whether the anticipation signals are the main driver of the observed pre-offer alphas. First, they might be positive not because of anticipation signals but because of the firms’ ability to announce takeovers when their stocks are overvalued. To address such concerns, I compare the alphas of three different (i.e., randomly selected, industry-size, and M/B-size) matched-control samples with those of the merger sample. If some marketwide, industrywide, and firm-level misvaluations produce those alphas in the main sample, similar alphas should also exist in the matched-control samples. I observe that the acquirers’ average pre-offer alphas exceed those of their peers by 0.30 percent to 0.75 percent per month, depending on the control sample. Similarly, the targets’ pre-offer alphas differ markedly from their peers. Therefore, misvaluation factors cannot explain the higher alphas. I attribute it to higher ex-ante merging likelihood.

Second, the positive pre-offer alphas in my paper are based on the CAPM as the model of expected returns. However, those alphas can be a product of some missing asset pricing factors (the “bad-model” problem) or a result of the clustering of takeovers in some industries or across specific periods. To rule out these possibilities, I use the calendar-time portfolio approach with several recently developed asset pricing models (such as the Fama-French five-factor model and the Hou-Xue-Zhang Q-factor model) to estimate the alphas. The results show that the calendar-time intercepts are significantly positive for merging firms and distinct from those of their matched-control samples.

Third, Eaton, Liu, and Officer (2019) document a run-up in target share prices after starting the private sale process, implying a leakage of information from private negotiation. Given that negotiations occur between the potential target and acquirer firms, the market may also anticipate the acquirers. Eaton et al. (2019) study only target firms, while I consider both. I hand-collect detailed information from company filings with the SEC related to the M&A transactions. I find significant price run-ups for acquirers, and so the market anticipates them, too.

Fourth, the following Figure plots CAARs over the (-126, 126) interval for the acquirers in the successful and failed deals. The pre-offer CAARs based on the market model (MM) are similar across both types of deals, suggesting their ex-ante merging likelihood is similar. However, the anticipation-adjusted approach (TBM) shows that the market distinguishes offers that are more likely to be consummated by greater pre-offer gains. It measures that the CAAR (-126, -2) for the acquirers in the successful bids is 7.89 percent, while it is 6.05 percent in failed ones. 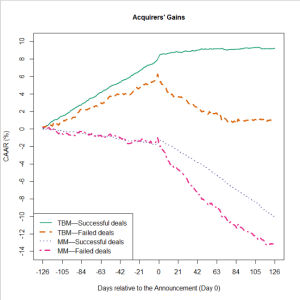 One may still argue that the higher pre-offer CAARs to the acquirer firms in successful deals indicate overvaluations of those firms, and not necessarily their higher ex-ante merging likelihood. However, if this is true, their CAARs should reverse after the announcement regardless of the deal outcome. This is because the market should perceive that such firms have timed takeover announcements to take advantage of their high valuations. However, I observe the TBM CAARs to the acquirer firms in the failed offers reverse back in the post-offer period, while those for successful bids slightly increase. These differential CAARs reflect only the difference in the ex-ante merging likelihood of successful and failed offers and not the market timing ability of the merging firms.

Thus far, my results show that the market incorporates anticipation signals in the pre-offer share price of merging firms. I use two tests to explore whether the signals are private or available publicly for some investors. Publicity would indicate that at least a group of investors anticipates the forthcoming mergers or that the information is leaked somehow during the private sale process. I find that public information increases significantly during the pre-offer period, confirming partial anticipation of mergers. I also investigate whether the holdings of institutional investors (arguably as sophisticated and informed traders) provide any direct evidence that a large group of investors is employing the anticipation signals in their portfolio management. The average institutional ownership for the acquirer firms is trending positively in the pre-offer period and exceeds those for their peers. This steeper trend suggests that institutional investors react to the anticipation signals by investing more aggressively in the potential acquirers.

Based on the results presented in my paper, future research could explore whether this new anticipation-adjusted approach can provide novel insights into the stylized takeover facts. Although this approach may seem specific to mergers, it is a general approach, and researchers can apply it to other types of (corporate) events.

[1] It is based on the structural break methodology of Qu and Perron (2007). This method detects the two most essential breaks in the pre-offer parameters of the CAPM. I justify this choice based on a finding that the average and the median number of breaks is two for both merging firms—the parameters of each return series change in response to the arrival of anticipation signals. While the alpha captures the valuation effect, shifts in the beta and the residual variance reflect the response of the risk measures. I use this two-break model (TBM) to estimate the anticipation-adjusted merger gains.

This post comes to us from Professor Mohammad Irani at the University of South Carolina’s Darla Moore School of Business. It is based on his recent article, “The Real Merger Gains: Correcting for Partial Anticipation,” available here.