Acquisitions are at the core of corporate strategy, enabling companies to expand and reposition themselves in the market. In 2019 alone, they accounted for nearly $3.7 trillion of economic activity. Yet acquirers famously struggle to realize value from these transactions. In a new study, we find that this challenge may be explained, at least in part, by the difficulty in maintaining a clear and compelling corporate purpose in the aftermath of the deal.

Purpose can loosely be understood as the “why” behind an organization’s existence. A recent survey of nearly 500 executives by Harvard Business Review Analytics Services revealed that 80 percent of the respondents believed that a compelling purpose is critical for companies, while less than 40 percent believed that their own company’s purpose was compelling. Another recent study by Ernst and Young and Oxford University’s Said Business School reported that the public discourse on purpose, as measured by number of press mentions, has increased nearly five-fold over the past 25 years.

Despite the growing importance of purpose, its intangible nature presents a substantial challenge for academic research. Purpose is not the same as “purpose statements” or “mission statements,” often empty marketing slogans that nearly every company issues. Instead, purpose must be a credible set of beliefs adopted by employees inside the organization, beliefs that drive real action up and down the corporate hierarchy. As articulated by José Viñals, the group chairman of Standard Chartered, “Purpose can never simply be a nice statement written on the walls of the company; there must be a deep understanding of the purpose and its connection to decision making to make it a reality.”

To surmount this challenge, we and our collaborators have been engaged in a decade-long research program aimed at providing empirical research on the role of purpose in for-profit businesses. Rather than relying on purpose statements, we infer the strength of purpose at the corporate level from the aggregate strength of employee beliefs in the meaning and impact of their own work. Our research has explored the links among purpose, financial performance,  corporate ownership, and sustainability.

In our most recent study, we focus on acquisitions. Our conjecture going into the study was twofold: first, that acquisitions, on average, erode the strength of purpose in the acquiring firms, and second, this erosion will not occur with all deals; some acquisitions might even reinforce purpose within firms. We examined 831 deals by U.S.-based acquirers between 2006 and 2018 to test these ideas. Here is what we found.

First, our initial conjecture was confirmed. Companies that engage in acquisitions, on average, experience a drop in purpose. Figure 1 shows this relationship. We allocated our companies into 20 evenly numbered groups ranked by their strength of purpose. We then looked at the percentage of companies within each group that had engaged in recent acquisitions. Figure 1 shows a clear negative relationship between the strength of purpose and the proportion of each group that reported recent deals. This negative relationship also holds up in more rigorous regression analyses. 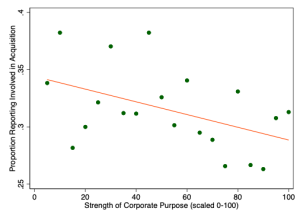 Figure 1: Percentile strength of purpose versus likelihood of recent acquisition

Second, we find that this decline in the sense of a company’s purpose after acquisitions occurs primarily among lower ranked employees. We find that a sense of purpose is actually higher following acquisitions among executives and senior managers, while it is lower for middle managers, salaried professionals and hourly employees. In other words, the sense of purpose among those who structure and execute the deal is stronger in the immediate aftermath, and weaker among those who experience it from lower in the organization. Figure 2 shows this effect. 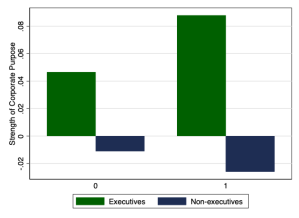 Figure 2: Split in response to acquisitions by hierarchical levels

Moreover, we found support for our second conjecture, that not all acquisitions follow this pattern: Roughly 35 percent of the deals are actually linked with stronger purpose. What distinguishes these deals from the others?

Our analysis identified two deal attributes that strongly predict purpose in the years following the acquisition: attributes that we refer to in the study as “deal specificity” and “deal uniqueness.” We rate deals high in specificity when their rationales are disclosed using precise and non-generic language. These deals tend to be associated with stronger post-acquisition purpose (see Figure 3). These are the acquisitions for which corporate leaders are both willing and able to describe their decisions using clear and compelling language, which in turn reinforces the sense of purpose among employees. 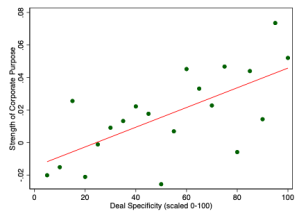 Unique deals, in turn, are those that involve uncommon acquirer-target industry combinations. We find that unique deals are associated with weaker post-acquisition purpose. In other words, the less common the industry targeted by firms in the acquiring firm’s industry, the more purpose is eroded in the years immediately following the transaction. 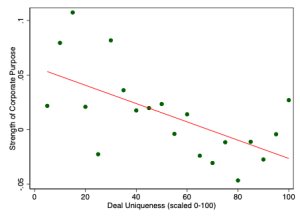 This finding is consistent with something in management research known as the “uniqueness paradox.” Uniqueness is generally considered valuable from a strategic standpoint. Companies rely on unique competitive positions to generate profits. However, these positions are often hard to understand for those without deep knowledge of the context. Prior research has focused on this asymmetry with investors and outside analysts. We argue that it also applies to lower-level employees.  Since middle and lower ranked employees do not have the same access to the information as those at the top of the organization, their beliefs are influenced (for better or worse) by the visible actions of management, such as acquisitions. Unique acquisitions may be more challenging for these employees to understand and reconcile with their preexisting beliefs for the same reasons as unique strategies are harder to understand for stakeholders outside the organization.

This pattern becomes all the more important when we consider the implications for downstream performance of these acquisitions. We find that deals that outperform financially are also those linked to stronger purpose in the years immediately following the deal. This link among deals, purpose, and subsequent performance is particularly strong for unique deals. In other words, unique deals that were successful surmounted the odds to sustain a strong purpose in the years that followed.

Overall, our findings suggest that, when choosing to implement acquisitions, firm leaders must account for their fit with the purpose of the organization, and particularly with the perceptions of purpose among the lower ranked employees. Most acquisitions precede declines in purpose. At the same time, deals that buck this trend and reinforce the organization’s purpose are those that outperform financially.

This post comes to us from Claudine Madras Gartenberg, a professor, and Shun Yiu, a doctoral student, at the Wharton School, University of Pennsylvania. It is based on their recent paper, “Corporate Purpose and Acquisitions,” available here.