Millions of dollars are spent every year by international financial institutions and development agencies to promote legal reforms in countries around the world. Indeed, since the late 1990s, legal reforms have become a key tool for trying to promote financial and economic growth. With the adoption of the UN’s Sustainable Development Goals (SDGs) in 2016, the pursuit of the rule of law and “good law” has become not just a tool for development, but a goal in itself. Indeed, the rule of law is enshrined in SDG 16.

Despite the strong belief in the importance of establishing good law, it is surprising how little we actually know about how the law affects economic outcomes. Of course, there is a vast academic literature that empirically investigates how different substantive and formal characteristics of a legal system affect these economic outcomes, such as financial market development. Chief among this stream of research are the studies by Rafael La Porta and colleagues investigating the impact of creditor-, labor-, and shareholder-protection on the development of financial markets and other outcomes.

Yet, this so-called “law and finance school” is surprisingly vague in conceptualizing the mechanisms that drive the link between law and economic outcomes. One of the reasons for this shortcoming is that law and finance studies often adopt an under-theorized conception of law; or at least the hypothesized impact of law on the economy is based on a rather simplistic view of the law (the “standard view”).

In a recent paper, we seek to address this shortcoming by developing a more nuanced theory of law and testing it in the empirical setting of shareholder protection law and initial public offerings (IPOs).

We argue that the law and finance school conceptualizes law (implicitly) based on the classical view of legal positivism. This school of thought focuses on the substantive content of law and how the threat of punishment creates incentives for economic actors to adapt their behavior. The law and finance school further assumes that law generates positive economic outcomes by reducing transaction costs. We call this the “efficiency effect” of law.

We complement this view of law with a second view, called the “legal signalling view.” This second view focuses on the impact that law has on the legitimacy (as opposed to the efficiency) of economic activities. Laws can have an impact on economic activity through increased efficiency and decreased transaction costs (the standard view). Yet, the law can also have an impact on behaviors by influencing people’s perception of a given legal system or the companies operating in it. We call this “legal perception.” The legal signalling view is justified based on more recent sociological and behavioral theories of law, which consider that law can have a symbolic or “signalling effect” that can be as important as the efficiency effect. In other words, the legal signalling view suggests that laws are not just transaction-cost reducing devices, but also legitimacy-creating devices that signal adherence to certain expected norms and behaviors to market participants.

The “legal signalling view may make intuitive sense, as corporate governance scholars have shown by studying a similar effect at the level of firm-level corporate governance mechanisms. Thus, in emerging markets, firms can successfully signal good practice to market participants by adopting internationally recognized desirable practices and thus compensate for weak legal institutions in a country. The legal signalling view complements this firm signalling view by arguing that laws too send out signals that influence market participants’ behaviors (such as investment decisions).

Figure 1: The actual quality of law and its perception 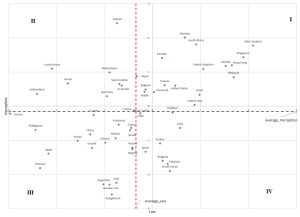 These findings indicate that there are many cases where the actual quality of law and legal perception diverge (i.e. the law is misperceived). We also find that the perception of the law matters more than the actual quality of the law for the valuation of IPO firms. This is confirmed for situations where the law is correctly perceived as good and situations where substantively bad law is misperceived as good law. In both cases, good perception has a positive effect on the IPO value of firms.

These findings challenge prior literature that assumes that law matters  but does not specify how and does not consider that the quality of the law and the perception of the quality of the law often diverge. The findings also provide a cautionary note regarding overly rationalistic views of economic actors. Instead, a more “constructivist” view of how the law affects economic activity, that leaves room for symbolic actions and the importance of legitimacy, seems in order.

This post comes to us from professors Gerhard Schnyder, Kun Fu, and Anna Grosman at Loughborough University London, Mathias Siems at European University Institute, and Ruth V. Aguilera at Northeastern University. It is based on their recent paper, “Legal Perception and Finance: The Case of IPO Firm Value,” available here.