On June 3, 2021 President Joseph Biden issued a “Memorandum on Establishing the Fight Against Corruption as a Core United States National Security Interest,” (hereinafter “Anti-Corruption Memorandum” or “Memorandum”).  In issuing the Memorandum, President Biden placed fighting corruption at the “core” of his foreign policy, and explained that he wanted his administration to “lead efforts to promote good governance; bring transparency to the United States and global financial systems; prevent and combat corruption at home and abroad; and make it increasingly difficult for corrupt actors to shield their activities.”  The Memorandum set a deadline for obtaining recommendations from a host of government agencies regarding the implementation of his aggressive anti-corruption agenda. These recommendations should include a full endorsement of using the enhanced whistleblower protections under the Dodd-Frank Act as a key component of the president’s anti-corruption program.

The problems that President Biden’s Anti-Corruption Memorandum is targeting with a renewed effort to combat international corruption are remarkably similar to the problems identified by the U.S. Securities and Exchange Commission (SEC) and the U.S. Department of Justice (DOJ) in supporting continued prosecutions under the Foreign Corrupt Practices Act (“FCPA”), including the use of whistleblowers as a key tool for detecting foreign bribery.

The SEC’s and DOJ’s Resource Guide to the U.S. Foreign Corrupt Practices Act, identified nearly identical problems that their efforts under the FCPA were designed to target. Given those similarities, the use of the FCPA should be the backbone of an effective anti-corruption program.  Likewise, the use of the Dodd-Frank Act’s transnational whistleblower program needs to be expanded, especially in light of the evidence of the invaluable role played by whistleblowers in detecting bribery.

President Biden set a deadline for his top advisers and cabinet officials to “develop a Presidential strategy” that would “significantly bolster” the United States’ ability to fight corruption.  He tasked the assistant to the president and national security advisor to coordinate the development of this strategy, and also tasked a number of cabinet officials and other ranking presidential appointees to provide input.

The president’s Memorandum made clear that the administration is serious about combating international corruption, and will welcome a wide range of views on how to get the job done.  Significantly, the Memorandum recognized the importance of collaboration between the U.S. government and various non-governmental actors.  One of the central goals was to:

Support and strengthen the capacity of civil society, media, and other oversight and accountability actors to conduct research and analysis on corruption trends, advocate for preventative measures, investigate and uncover corruption, hold leaders accountable, and inform and support government accountability and reform efforts, and work to provide these actors a safe and open operating environment domestically and internationally.

Although whistleblowers were not explicitly referenced, they , should play a critical role in the final anti-corruption strategy. It is now beyond question that numerous transnational anti-corruption prosecutions are based on information obtained from a number of highly successful whistleblower programs with transnational reach. As explained below, these programs have already resulted in multi-billions of dollars in recoveries. They have been uniformly praised by the leading officials responsible for their implementation, and they have provided unprecedented protection and support for whistleblowers, many coming from highly corrupt countries.

Based on the success of these programs, the Biden Administration should adopt the recommendations set forth below.

The Role of Whistleblowers Under the DFA in Fighting International Corruption

The United States has enacted a number of whistleblower laws that that have proven to be highly successful in giving whistleblowers incentives to report corruption, both domestically and internationally.  In a bi-partisan manner, the government officials responsible for administering these programs have universally praised them as being among the most effective laws combatting fraud and corruption. The whistleblower law that empirical evidence has demonstrated to be the most effective in fighting international corruption is the Dodd-Frank Act (“DFA”), which permits non-U.S. citizens to report violations of the FCPA.  Since 2010, over $14 billion in penalties have been collected from illegal practices committed by non-U.S. companies. 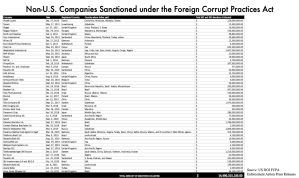 The DFA was signed into law on July 21, 2010, and has proven to be a magnet for international whistleblowers. It contains model whistleblower provisions that have gained strong bi-partisan support and give whistleblowers strong incentives to report high-quality information regarding corrupt activities.[1]  Under the DFA,  non-U.S. citizens could, for example, file a complaint anonymously and directly with the SEC and qualify for mandatory financial rewards.  Although cases should be initially filed with the SEC, in most FCPA cases the DOJ is also included in the investigation, and the whistleblower works jointly with both agencies.  This cooperation was specifically permitted (and encouraged) under the “related action” provisions of the DFA.

Experience with the DFA whistleblower law has demonstrated that international whistleblowers can be encouraged to provide highly valuable intelligence.  Whistleblowers have played, and can play, a significant role in the detection of corrupt practices, both here and abroad, that are often conducted in secret and very difficult to detect without the assistance of an insider.

Empirical evidence supports these conclusions.  As reported by the SEC’s Office of the Whistleblower, since 2011, 4,538 whistleblowers from 129 countries have filed whistleblower claims. 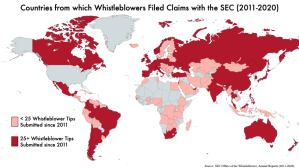 Many of these cases have resulted in significant enforcement actions and recoveries.  Already, close to $100 million has been paid in rewards to non-U.S. persons or whistleblowers who have reported issues directly related to international corruption.  The SEC has been very clear about the extraterritorial jurisdiction of its whistleblower program, and has encouraged international whistleblowers to step forward.  As explained by the SEC’s deputy secretary in an order granting an award to a non-U.S. citizen whistleblower, “[I]t makes no difference whether . . . the claimant was a foreign national, the claimant resides overseas, the information was submitted from overseas, or the misconduct comprising the U.S. securities law violation occurred entirely overseas.” (See  Order Determining Whistleblower Award.)

The OECD’s recent Phase IV report on the U.S. pointed to the “Dodd-Frank Act’s multi-faceted protections,” including its “powerful incentives for qualified whistleblowers to report foreign bribery allegations,” as among the U.S. government’s best practices.

The key to the success of the SEC’s program is based on a number of procedures and rules that make reporting corruption transnationally a reasonable option to a rational economic actor interested in exposing and stopping corrupt practices.  They include:  (a) a simplified process for filing a complaint anonymously; (b) strict confidentiality requirements that provide the most important protection for non-U.S. whistleblowers; (c) a guaranteed financial reward if the original information provided results in a successful enforcement action; (d) the ability to provide the evidence to a law enforcement agency outside of their nation-of-residence; (e) the fact that the United States has not established a track-record of compensating whistleblowers, thereby building trust in the overall whistleblower programs.

[1] In September 2020 then-Chairman Jay Clayton described the DFA’s whistleblower program in glowing terms: “Over the past ten years, the whistleblower program has been a critical component of the Commission’s efforts to detect wrongdoing . . . particularly where fraud is well-hidden or difficult to detect. Enforcement actions from whistleblower tips have resulted in more than $2.5 billion in ordered financial remedies.”

This post comes to us from Stephen M. Kohn, a partner in the law firm of  Kohn, Kohn & Colapinto, LLP, and chairman of the board of directors of the National Whistleblower Center.