A paradigm shift is underway: The corporation – much reviled as a cost-externalizing, short-termist, inward-focused, politically manipulative machine – is undergoing a fundamental change. This is good news. Corporations are beginning to confront the harm they created, allowing capitalism to start healing itself.

The Rise of ESG Investing

There are three powerful factors at work. First, most large investment funds are either incorporating ESG into their investment decisions or tracking stock market indices.  Either way, there is the growing realization that bad companies or bad investments can hurt the entire portfolio. Big investors are realizing that everything is connected, and they’re either shedding the bad companies or attempting to discipline them.

Here is the growth in “managed portfolios” that have embraced ESG by incorporating it into their investment models – as of 2020: 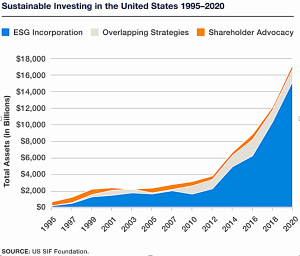 So, last year, $18 trillion of the some $30 trillion of “managed” financial assets in the United States incorporated ESG in how the big investment portfolios were constructed – that’s 60 percent of the U.S. “managed” market. Most of the remainder of the U.S. financial assets are indexed – that is, they’re tracking the market, whose pricing is driven by ESG investing.  (These numbers are replicated worldwide.)

Let me illustrate using one of Wall Street’s favorite recent punching bags:  ExxonMobil.  As stock market investors – especially big institutions – have started to notice how everything is connected, they’ve looked at oil and gas. The sector, they’re figuring out, has a bleak future.  ExxonMobil, for example, is sitting astride lots of wasting assets – $332.8 billion as of 2020 – and its market cap is $260.9 billion. The upshot: Expect many more write-downs.

The data are stunning.  In the last five years, the stock price of ExxonMobil (the world’s largest oil and gas company) has fallen 28 percent, while the S&P 500 (even though dragged down by the fossil-fuel sector and companies that have downplayed ESG) has risen 99 percent. 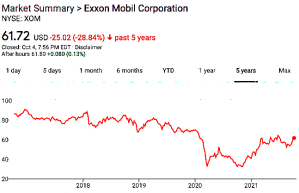 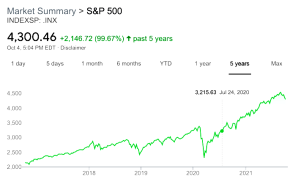 The Significance of ESG Is Only Growing

The second powerful force at work is ESG.  Over the last several years, it has become clearer that corporations that seek to be aware of their environmental, social, and governance actions (ESG) have perform better financially. Companies that engage in no ESG or fake ESG continue their delusional thinking that the world is not interconnected. And their financial performance and stock prices are suffering and will only continue to suffer.

For example, it turns out that electric vehicles (EVs) are better than vehicles with internal combustion engines. That, at least, is the view of the stock markets.  Tesla’s current market cap of $750 billion is greater than the combined market caps of the next six largest vehicle manufacturers: Toyota, VW, BYD, Daimler, GM, and BMW. And all these laggards have solemnly declared their commitment to move to EVs. Real ESG or fake ESG?  The stock markets aren’t sure.

Here’s what pursuing ESG policies looks like. Did you catch how much the price of Tesla’s shares went up in the last five years? 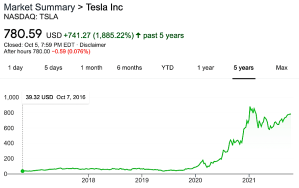 Tesla is not alone.  Other companies have experienced a big stock-market pat on the back when they pursue real ESG; just search online for “best ESG companies and stock price performance.”  But I warn you, some of these companies may be trying to fake ESG (commonly called greenwashing).  Everyone seems to be trying to distinguish between the real deals and the pretenders, and everyone’s getting better at it, because real ESG produces golden long-term returns and fake ESG just fizzles.

Does ESG show up in the real world?  Sometimes it’s hard to see. But look at the Teslas and other EVs that have been sold. Then run the numbers on how much less net CO2 these EVs emit. The graph you get, like EV sales, will be exponential.

The third powerful force at work is the (almost miraculous) communication and information advances of the internet. Investors learn in milliseconds what is happening with companies. And companies can learn and implement new ESG tactics almost overnight.And there are also powerful feedback loops that only accelerate these phenomena.  Companies that infuse real ESG into their operations – not the fake stuff that the financial markets are getting better and better at ferreting out – attract money from the big investment firms engaged in ESG investing.  And with additional capital, these real ESG companies increase their real ESG operations, attracting further ESG investing.

What does ESG-induced stock performance look like? Here’s a chart using data from MSCI:

If you had invested in a global index of companies designated as ESG leaders during almost any period from 2007 to 2019, your investments would have outperformed that same global index with all companies – by a wide margin. And this margin grew after 2015.  (Notice that $10,000 invested in ESG leaders in 2007 would be $50,400 in 2019, while the same $10,000 invested in the overall market would be $32,800 in 2019.)There are all kinds of other charts – some including 2020 and 2021.  But remember, once a company is identified as pursuing real ESG, it gets blessed.  And companies faking ESG get sent on a downward spiral. At least, this has been quite clear since about 2012.There’s another feedback loop that enhances ESG performance.  It involves “managed” funds and “indexed” funds.  We know the managed funds are buying and selling, looking for ESG alpha. Meanwhile the indexed funds – denied the luxury of buying and selling – are engaging with companies, using their leverage and voting power.  It’s a good-cop/bad-cop play. The weak or fake ESG companies can’t hide.

But there is a timing issue.  Just as these developments are happening exponentially, Mother Nature has begun her own feedback loops.  For example, the fires in Siberia – which make the West Coast fires (as devastating as they’ve been) look like a kid playing with matches – are thawing the tundra and unleashing ungodly amounts of methane.  Next year. they will probably be worse.Can Capitalism catch up?  Unlike Mother Nature, capitalism does not work on an annual, solar cycle.  It works on at least a quarterly cycle when companies file their financial 10-Qs. And, given that financial analysts have every incentive to know as much about public companies as the companies themselves, capitalism is really working on an almost minute-to-minute cycle.

Government has played an important role in the ESG movement. It has insisted on transparency about companies’ financial performance – not to mention the financial performance of many institutional investors. And it has also been quite good at disciplining both companies and investment firms that lie — or are reckless – in their financial disclosures.And government has insisted on some environmental compliance, some workplace safety, and some human dignity in the workplace.  It has supplemented health care coverage when companies dropped the ball. And this is all important, but there’s still a lot of play in the joints – that is, a lot that the government has not done.  Like a carbon tax or caps on CO2 emissions.But government has also done some damage – like subsidizing some loser sectors, particularly the fossil-fuel industry.  But even with these subsidies, these ESG laggards have a dismal future.  The bell will soon toll for them – though, because of the subsidies, perhaps a bit later than it would otherwise.  Congress can only subsidize so much – it would have to empty the national treasury to beat back the markets.

Why It’s Hard to Get

All of this is about guessing the future.  But we humans don’t grasp exponential change very well. We are linear thinkers, extrapolate from past and drawing a straight line. Some of us notice the tangent – the rate of change at a specific moment. but we can’t really grasp that the future is being written by the second derivative.There’s a great graphic that I’ve adapted from waitbutwhy.com: 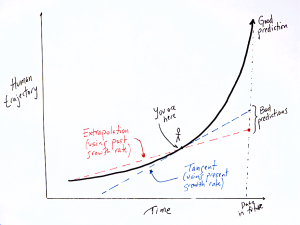 Here’s the takeaway.  Indexing, ESG performance, and the internet seem to have come together in a way that puts capitalism in a position to heal itself. With help from each of us – focused, data-driven, action-oriented, and present and caring. We can’t afford to dally. Not one day.

This post comes to us from Alan R. Palmiter, the William T. Wilson, III, Presidential Chair for Business Law at Wake Forest University. It is based on his recent short essay, “Capitalism, heal thyself,” available here.