Traditionally, high-growth private firms in the United States have used the public equity markets as their primary source of external financing to fund innovation and expansion. For this reason, well-functioning capital markets have been instrumental to the U.S. economy, supporting job creation and economic growth. In recent decades, however, there has been a decreasing number of U.S. companies going and staying public, attracting significant concern from regulators. In particular, the U.S. Securities and Exchange Commission (SEC) is concerned that firms using private rather than public sources of financing limits investment opportunities for ‘Main Street’ investors and reduces the availability of “transparent, information rich and fair” public prices. In light of firms shunning the traditional initial public offering (IPO), regulators have made public equity markets more welcoming and attractive relative to private markets, especially for young and high growth firms.

One important set of changes to the U.S. IPO process is the Jumpstart Our Business Startups Act of 2012 (the JOBS Act). The JOBS Act has two main components for firms with pre-IPO revenue of less than $1 billion, called emerging growth companies: the ability to interact with investors before filing for an IPO (so-called “testing the waters”) and the option to reduce financial disclosure in IPO filings. Regulators designed these changes to “de-risk” and “de-burden” the IPO process for firms, but in doing so they increased the information advantage of firms over investors – testing the waters allows firms to collect information they do not have (e.g., buyers’ valuations) while reduced disclosure allows firms to reveal less to investors.

In a recent article, we examine the impact of the JOBS Act on treated firms’ ability and willingness to go public and the related effects on important market outcomes such as the number and quality of public firms. We use a difference-in-difference empirical specification in order to control for latent market conditions that do not have sufficient proxies, such as investor sentiment. Our main control group is U.S. firms that are not emerging growth companies because they have more than $1 billion in pre-IPO revenue. 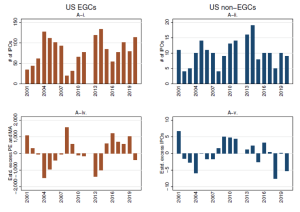 We argue that this decrease in IPO propensity is consistent with the fact that the ability to test the waters has increased firms’ information advantage over prospective investors. We build a theoretical framework to show that high quality firms signal their type while low quality firms self-select out of the IPO process, and the net result is a reduction in an average firm’s propensity to go public.

Consistent with our signaling framework, we further explore the costly signals that high quality firms may use to separate themselves from low quality firms. We show that underpricing has significantly increased, and underwriter and other certification has somewhat increased, for treated firms in the post-JOBS Act period. Moreover, we also find evidence that the treated IPO firms in the post-JOBS period are of higher quality.

As a final step, we discuss the potential alternative explanation of some of our results: the reduced disclosure permitted by the JOBS Act. By exploiting the introduction of the Small Reporting Company exemption in 2008, which allowed some firms to reduce disclosure, we show that the ability to reduce disclosure increased firms’ likelihood of doing an IPO, and that the introduction of the ability to test the waters decreased firms’ likelihood of doing an IPO and caused a large increase in underpricing. This analysis underscores that it is testing the waters, rather than disclosure, that is driving the decrease in IPO propensity.

Overall, we show that, while allowing firms to collect additional information may help improve the quality of IPO firms, it will not increase the number of IPOs, which we understand to be a primary goal for U.S. regulators. These results are important to consider for other countries considering similar reforms and for U.S. regulators, who extended the ability to test the waters to all firms in December 2019.

This post comes to us from Michele Dathan, an economist with the Board of Governors of the Federal Reserve System, and Yan Xiong, a professor at The Hong Kong University of Science and Technology. It is based on their recent article, “Too much information? Increasing firms’ information advantages in the IPO process,” available here.