Venture capital (VC) has become an increasingly important asset class for institutional investors such as endowments, pension funds, insurance companies, and sovereign wealth funds, as well as for wealthy individuals. A large amount of money is involved: U.S. VC-backed companies raised nearly $300 billion in 2021. Moreover, there is a great deal of hype related to the potential benefits of VC. Everyone is aware of examples of phenomenally successful VC investments, including in Amazon, Facebook, and Tesla. And a quick Google search reveals many sources touting VC returns of 15 to 30 percent (and sometimes much higher).

The appeal of these returns to retail investors is obvious. In an effort to meet retail demand, mutual funds and innovative private equity firms have sought ways to provide broader access to VC. Moreover, in 2020, the SEC expanded the definition of an accredited investor to give more retail investors access to VC.

These developments, especially those that enable less sophisticated investors to access VC, give rise to concerns about the accuracy, reliability, and possible bias or overstatement of key performance metrics. Since investments in VC are not publicly traded, valuations reported by general partners (GPs) and possibly by limited partners (LPs) are based on fair value standards and are subject to judgment and selective reporting. GPs and some LPs self-report performance metrics to data collection services, raising the possibility that reported performance may be overstated.

While performance reporting is voluntary for GPs and some LPs, it is not voluntary for LPs that are subject to the U.S. Freedom of Information Act (FOIA) disclosure requirements or to state-level FOIA-like provisions. FOIA gives the public the right to access records from federal agencies. All 50 states have FOIA provisions that resemble the federal FOIA. Because FOIA-eligible LPs must provide available information that is responsive to FOIA requests for VC returns, performance reported by FOIA-eligible LPs may be less susceptible to concerns about reporting bias and selective reporting.

In a forthcoming article, my co-authors and I use performance statistics reported by FOIA-eligible LPs as a benchmark against which to assess possible bias and selective reporting by GPs. Our study is based on a large dataset of 7,690 fund-years from PitchBook, one of the most widely relied upon reporting services for fund-level performance, and also the data arm of the National Venture Capital Association.  One advantage of using PB relative to alternative sources is that it collects performance metrics of both GPs and LPs. 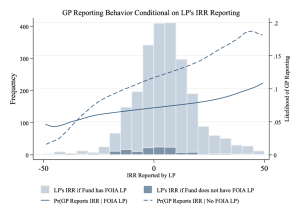 For funds where both GPs and LPs reported, we also compared the performance reported by GPs with that reported by LPs. The difference suggests a tendency of GPs to overstate results (compared with what LPs report) by 2.2 percentage points. Assuming that performance is accurately reported by LPs, the results suggest that the tendency of GPs to overstate returns may be somewhat tempered by the presence of FOIA-eligible LPs. This estimate falls to 1.4 percentage points when comparing GP with LP IRRs for funds with FOIA-eligible LPs.

Overall, our results show that GPs report better performance than do LPs mainly because they selectively choose to report when the metrics reported by their LPs are favorable. This behavior can result in misleading returns to VCs because failed funds or even low performing funds can be left out of the averages. We estimate that selective reporting by GPs overstates VC fund returns by 4 percentage points.

The takeaway for investors is two-fold: Recognize that reported statistics on VC performance may be subject to a significant upward bias, and when evaluating a VC investment, pay attention to the identities of the other LPs, as FOIA eligibility is associated with more transparent reporting by the fund.

This post comes to us from Erin E. Smith, an economist at the U.S. Securities and Exchange Commission. It is based on a recent article, “Bias in the Reporting of Venture Capital Performance: The Disciplinary Role of FOIA,”which she co-wrote with Janet Kiholm Smith, a professor at Claremont McKenna College’s Robert Day School of Economics and Finance, and Richard L. Smith, a professor at the University of California, Riverside’s Anderson Graduate School of Management. The article is forthcoming in the Review of Corporate Finance and available here.

The Securities and Exchange Commission disclaims responsibility for any private publication or statement of any SEC employee or commissioner. This post expresses the author’s views and does not necessarily reflect those of the commission, the commissioners, or other members of the staff.