On July 21, 2022, the U.S. Securities and Exchange Commission (SEC) commenced the first ever lawsuit charging insider trading in cryptocurrency markets. A former employee of Coinbase – a major cryptocurrency exchange – together with his brother and a friend, were arrested and charged with wire fraud in connection with a scheme to commit insider trading.[1] The three men allegedly used confidential information about coins that were to be listed on the Coinbase exchange prior to the official listing announcement. If found guilty, they could face prison sentences of up to 20 years.

Cryptocurrencies are a form of digital asset that allow users to make payments to each other. More broadly, digital tokens that are transferred on blockchains can represent ownership of a range of assets or entitlements, including ownership in ventures, traditional financial securities, and fiat currencies. They have experienced a rapid growth in popularity since Bitcoin was created in 2009. As of July 2022, even after a sharp fall in valuations, the market capitalization of cryptocurrencies and digital tokens is over $1 trillion. There are over 10,000 different types in circulation and about 300 million cryptocurrency users, and many institutional investors hold stakes in digital assets.

With the increasing interest and market capitalization come increased regulatory concerns about misconduct, crime, and investor harm. One such concern is insider trading.

Insider trading occurs when market participants trade on confidential information, originating within an organization, that is not known by the general public. Insider trading is illegal in most jurisdictions and punishable with large fines and imprisonment.  Until recently insider trading had only been prosecuted as a problem in traditional markets. However, the recent SEC case signals that regulatory authorities are ready to curb this form of financial misconduct in cryptocurrency markets.

Records of all cryptocurrency transactions are stored in a transparent and immutable structure known as the blockchain. While the actual identity of traders is hidden behind digital wallets, the public and highly transparent nature of blockchains allows researchers to gain access to detailed trading data to study crime and misconduct more directly than is possible in traditional stock exchanges.

Exploiting these granular blockchain trading records, our study identifies the digital wallets of individuals that trade in a manner suggesting they had access to non-public information about cryptocurrencies due to become listed on cryptocurrency exchanges. The study shows how a set of four connected wallets consistently took positions in cryptocurrencies hours before official listing announcements, earning them profits of $1.5 million. The identified wallets purchased the affected tokens  prior to the official listing announcement and ceased their trading activity shortly after selling their positions following the announcement. 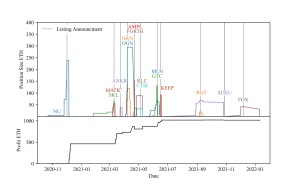 Trading activity of wallets involved in potential insider trading. The top panel presents the wallets’ position size (in ETH) for trades surrounding the listing announcement dates. The bottom panel shows the total profit in ETH that the wallets made on these trades

Why Should We Care?

The study estimates that insider trading on cryptocurrency listing announcements happens in 10-25 percent of the cryptocurrency listings of our sample. The upper bound is derived by statistically comparing abnormal returns identified prior to the listing announcements with those from prior periods to control for abnormal return patterns unrelated to insider trading. The 10 percent lower bound comes from the number of coin listings for which the study has direct wallet-level evidence. This finding suggests that insider trading in cryptocurrency markets is significant and more prevalent than in traditional stock markets. Statistical evidence also shows significant abnormal returns and run-up patterns prior to the listing announcements similar to the trading behavior that so far has been identified in prosecuted cases of insider trading in stock markets.

While cryptocurrencies and digital assets have many potential benefits, misconduct in cryptocurrency markets poses a challenge that can inhibit more general adoption of digital assets in traditional finance. As other forms of financial misconduct, insider trading is detrimental for market integrity and its presence can harm investor confidence. If investors believe cryptocurrency markets are being rigged by insiders and manipulators, they may choose not to participate in them, hindering the realization of gains from trade.

The recent SEC case signals that regulators are ready to curb insider trading in cryptocurrency markets. Exchanges should also have incentives not to turn a blind eye to cases of insider trading taking place in their exchanges if they do not want to risk an exodus of participants or even charges of wrongdoing.

This post comes to us from Ester Félez-Viñas, Luke Johnson, and Tālis J. Putniņš at the University of Technology Sydney. It is based on their recent article, “Insider Trading in Cryptocurrency Markets,” available here.