The U.S. Securities and Exchange Commission (SEC) brought 51, 30, and 33 insider trading cases in 2018, 2019, and 2020, respectively. Whether those numbers mean that insider trading is relatively uncommon or that the cases regulators and prosecutors have pursued are just the tip of the iceberg is difficult to determine and poses a challenge for studying insider trading.

We address this challenge in a new paper on how option investors responded to a significant increase in the likelihood and severity of prosecution after hedge-fund manager Raj Rajaratnam’s arrest in October 2009. His case marked the start of a major campaign against insider trading that extended from late 2009 to 2013 after two decades of relative quiet. Federal prosecutors racked up 93 convictions during that period, and Rajaratnam was sentenced to 11 years in prison, the longest sentence ever for insider trading.

We focus on option investors because many prior studies show that option trades strongly predict future stock returns. That is, stock prices tend to increase (decrease) after investors buy a lot of call (put) options. Option investors can obtain an information edge through either analyzing public data better than others or using non-public information from corporate insiders. We hypothesize that Rajaratnam’s arrest discouraged investors from trading on inside information. 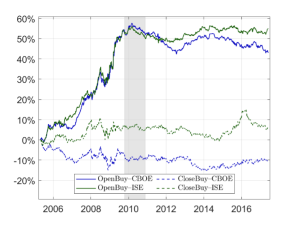 Option trades suddenly lacked information useful for predicting stock returns. What can explain this sudden change? Perhaps Rajaratnam’s arrest scared option investors whose practice was to trade on what prosecutors might consider material inside information. Indeed, option open-buy volume, which the put-call ratio is based on, decreased post-arrest. On the other hand, investors whose practice was to trade on publicly available data had nothing to fear and likely continued trading. Yet the put-call ratio that reflected trading by these public-data investors showed no profits, indicating that these investors were in the minority, and most informed investors left the options market post-arrest. Thus, our results are consistent with the hypothesis that trading on inside information was prevalent in the options market.

Our paper presents a stronger case than do prior acadmic studies for the hypothesis that insider trading is prevalent in the option market. First, we rely on a natural experiment that affects primarily trading on insider information but not trading on public data. Second, we establish our results for the entire options market rather than special events such as M&A news. Our approach does have limitations. First, we do not directly observe what information investors use, we infer it indirectly from their trading. Second, the sharp discontinuities in return predictability and trading volume help alleviate some of the concerns about confounding effects. However, like other studies of significant events, we are limited to one event and thus cannot completely rule out all alternative explanations. Reassuringly, the results are very similar for the put-call ratios separately computed from CBOE and ISE option volume, which addresses many of the data-specific concerns.

This post comes to us from professors Oleg Bondarenko at the University of Illinois at Chicago and Dmitriy Muravyev at Michigan State University. It is based on their recent paper, “How Common is Insider Trading? Evidence from the Options Market,” available here.