On June 21, 2021, the International Monetary Fund (IMF) weighed in on the economic situation in Africa, and the news was not good.

“African economies are at a pivotal juncture,” the IMF said. “The COVID-19 pandemic has brought economic activity to a standstill. Africa’s hard-won economic gains of the last two decades, critical in improving living standards, could be reversed. High public debt levels and the uncertain outlook for international aid limit the scope for growth through large public investment programs. The private sector will have to play more of a role in economic development if countries are to enjoy a strong recovery and avoid economic stagnation..”[1]

The news did not deter the African Development Bank (AfDB) from its long-standing ambitions, however. The bank still wishes to develop efficient and liquid financial markets in Africa for the effective mobilization and allocation of financial resources to the continent’s key sectors, including infrastructure.

As the AfDB wrote back in 2008, “Deep and liquid bond markets are essential for a country to enter a sustained phase of development, driven by market-determined capital allocation. However, bond markets in Africa remain largely underdeveloped, with corporate bond markets non-existent or in their infancy. Launched by the African Development Bank (AfDB) Group in 2008, the African Financial Markets Initiative (AFMI) is designed to further develop local currency bond markets on the continent. “[2]

The Role of the African Development Bank 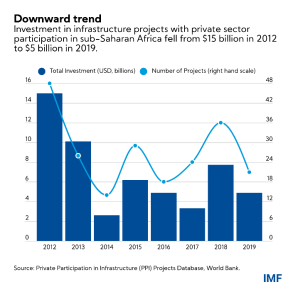 The Democratic Republic of Congo

With a population exceeding 90 million people, the Democratic Republic of Congo (DRC) is the fourth largest African country. However, its $54 billion of GDP ranks only ninth.

The ecosystems of the Democratic Republic of Congo are rich and varied. The Congolese natural fauna is rich in various species, each adapted to the climatic and floristic conditions. According to the United Nations, the DRC has huge economic potential; it accounts for around 17 percent of global production of rough diamonds, for example. The copper belt that runs through Katanga and Zambia contains 34 percent of the world’s cobalt and 10 percent of the world’s copper. Moreover, 60-80 percent of global reserves of coltan, used in the manufacture of mobile phones, computers, and other electronic equipment, can be found in north and south Kivu. Yet extraordinarily little of the revenue from natural resource exploitation has been used to contribute to the country’s overall development or to raise its peoples’ living standards.

According to ANAPI, the untapped deposits of raw minerals owned by the DRC are estimated at $24 trillion, including the world’s largest reserves of cobalt (51 percent of known reserves) and significant quantities of diamonds, gold, and copper.[3] 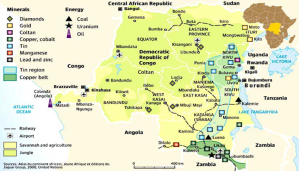 The Role of Capital Markets in Africa

Capital markets serve at least three important purposes, which influence the development of the region and its countries.[4]

While Africa is not substantially different from other developing economies, as they all depend on foreign sources of capital, most African countries’ access to funding has been limited to multilateral and bilateral public sector sources.

In a continent where China has widely financed projects, the geopolitical risks of that dependency cannot be overestimated. Critics have long accused Beijing of practicing debt-trap diplomacy, suggesting it deliberately lends to countries that it knows cannot repay the money, thereby increasing its political leverage. China vehemently rejects this charge, dismissing it is a way for the U.S. to discredit Beijing, Washington’s main challenger in the quest for influence in Africa.[5] The Chinese refusal to participate in multilateral debt reorganization under the IMF initiatives is one of the main obstacles to the current efforts to anticipate possible defaults in Africa. This led China to forgive only 23 loans (out of more than 1,000) in2021. 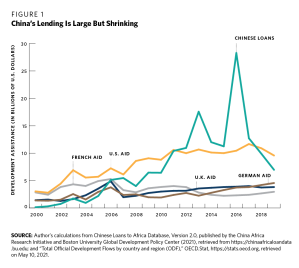 The Development of a DRC Capital Market

The U.S. State Department characterizes the situation as follows: “Although reforms have been initiated, the Congolese financial system remains small, heavily dollarized, characterized by fragile balance sheets, and cumbersome to use. Further reforms are needed to strengthen the financial system, support its expansion, and spur economic growth. Inadequate risk-based controls, weak enforcement of regulations, low profitability, and excessive reliance on demand deposit undermine the shock resilience of the financial system.”[6]

The strong dollarization of the Congolese economy limits the ability of its central bank to function as a lender of last resort. Almost all the banks are foreign owned.

Table 1: Evolution of indicators for assessing the level of dollarization in the DRC

If the DRC’s access to international capital markets were ever temporarily limited, the existence of a liquid internal market would be essential to mitigate financing risks. In addition, the development of an inner yield curve could serve as a benchmark for domestic issuers. Indeed, the diversification of risks and the reduction of the long-term cost of debt depend on the solidity and deepening of the domestic financial market. Bank financing is dominated by the collection of deposits, nearly 90 percent of which are denominated in U.S. dollars and deposited in current accounts. In 2021, the overall outstanding balance of bank deposits amounted to $11.1 billion with a preponderance of demand deposits and foreign currency (91 percent) against 8 billion in 2020. This predominance of demand deposits reduces the ability of banks to finance the economy, which requires the collection of stable resources.

The Central Bank of Congo (CBC) took the bull by the horns and initiated the first initiative to develop a short-term government bills market under Governor Deogratias Mutombo.

In this context, the CBC and the government announced the resumption of issuance of Treasury securities in the DRC in October 2019, after a long absence from the country in the market. The first auction operations mainly concerned Treasury bills. Before the opening of the market in September 2020 to other players, in particular institutional investors, individuals, and pension funds, only banks were admitted as subscribers of public securities.

In order to support the action of the Government, the Honorary Governor Deogratias Mutombo Mwana Nyembo published his white paper on “the establishment of an internal market for Treasury securities.”[7]

However, the Congolese public debt market remains embryonic. Indeed, the reasons for its dysfunction are multiple and mutually reinforcing. There are five main bottlenecks:

Pending the establishment of a structured financial market, on December 17, 202, the CBC published instruction No. 50 with a view to facilitating access to the capital market for companies to finance themselves with large amounts. This regulatory text sets the conditions for issuing negotiable debt securities (TCN) on the money market.

In terms of market infrastructure, it should be noted that the central depository managed by the CBC is able to manage TCNs issued by banks for their own account and for the account of third parties. The model adopted by the stakeholders recognizes the quality of issuer of TCNs to banks approved in the DRC, insurance companies and non-financial companies.

Under the dire financial markets condition, the establishment of a structured capital market (bonds and equity) is critical and urgent. Previous attempts have been unsuccessful for political (and governance) reasons. The DRC no longer has the luxury to develop its economy without the support of capital markets.

Currently, there are 29 exchanges, including two regional exchanges, on the African continent. Several countries either have their own stock exchanges or belong to a regional stock exchange, which fuels their economy and provides a means for individuals to invest in the future of their country. The DRC is not one of them.[8]

This post comes to us from Georges Ugeux, who is the chairman and CEO of Galileo Global Advisors and teaches international finance at Columbia Law School, and John Mbuluku, who is a PhD student in economics at the University of Kinshasa, a manager of the Central Bank of Congo, and a member of the Financial Capital Market Development Project (DRC).