Board-shareholder engagement plays an important role in corporate governance. In the last decade, investors have increasingly influenced business decisions, and their activities have extended beyond the formal submission of shareholder resolutions for voting at annual meetings. On their part, directors and managers have kept an open channel of communication. Yet, much of board-shareholder engagement consists of private interactions and, as a result, very few details about it are reported.

We seek to fill this gap in a new paper that sheds light on closed-door board-shareholder engagement with a survey of SEC-registered corporations. The survey was circulated among corporate secretaries, general counsel, and investor relations officers and prompted 171 responses. In the paper, we review and analyze data on corporate-shareholder engagement from disclosures by Russell 3000 and S&P 500 companies.

On frequency of engagement, although corporate-shareholder engagement is important, it does not affect all issuers: Four of 10 companies in the Russell 3000 sample and two of 10 in the S&P 500 sample did not engage with investors in the preceding 12 months. The results suggest that investors can engage with only a limited number of their portfolio companies, and that they tend to focus on larger and more prominent businesses. According to the survey, the larger the companies, the more frequent the engagement. 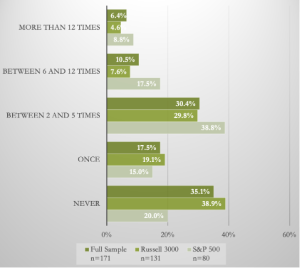 Our data show that engagement is on the rise, especially for medium-sized firms, which are feeling more pressure from investors on ESG matters. According to survey respondents, engagement has increased in the last three years in several categories. 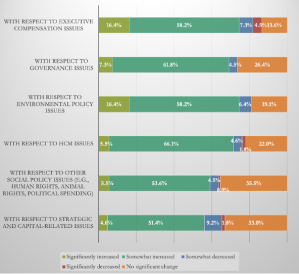 Engagement is time consuming: Seven of 10 surveyed companies responded that their longest engagement — the time between when an issue was first raised with a board and when it was resolved — lasted more than a month, with nearly 40 percent of companies across the various samples responding that the longest instance of engagement lasted six months or more. Approximately 10 percent of companies in the sample and across the Russell 3000 and S&P 500 indexes reported that their shortest engagement lasted one-to-six months. 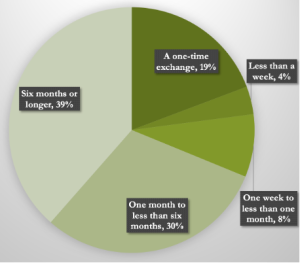 Private-sector asset managers (including the Big Three and other managers of mutual funds) are the largest interlocutors of our respondents (especially large ones), followed by hedge funds (especially for companies of small/middle size), and pension funds.

Companies deal with a sizeable percentage of their shareholders every year (although not in every engagement). Companies disclosed the following data in terms of aggregate shares held by shareholders who engaged, in one or more occasions, with the company in the fiscal year: 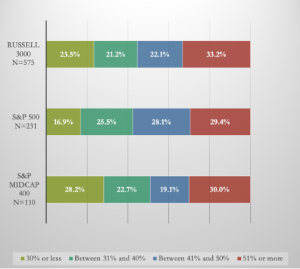 Nearly 60 percent of respondents disclosed that their CEO was involved in the process. Companies of all sizes reported high percentages of CEO participation, with only companies with annual revenue between $10 billion and $50 billion reporting CEO involvement less than half the time (48.6 percent). The most frequently involved board member for all company sizes was the lead independent director (LID), who is generally present at least eight of 10 times and leads the process around three of 10 times. 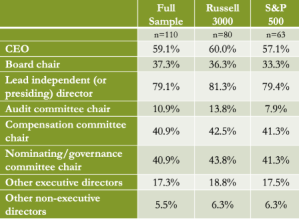 Disclosure data contain information on who leads the engagement process among various board members:

With their CEOs, general counsel were the officers most often present, with rates well above 70 percent: GCs of Russell 3000 companies were present 85 percent of the time. 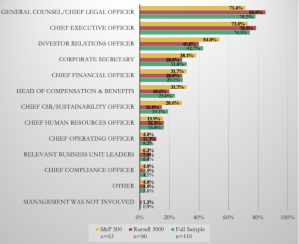 Shareholder engagement encompasses a wide range of topics – primarily emerging practices pertaining to executive compensation, corporate governance, and sustainability programs of the company. In the area of executive compensation, companies and shareholders mostly engage on the design of incentive plans (including the choice of new, ESG-related performance metrics). In the area of corporate governance, investors have shown interest in issues such as board composition, diversity, director retirement, and overboarding policies. In the sustainability area, engagement has focused on climate change, GHG emissions and energy consumption; on the human capital front, engagement mainly focused on workforce diversity and gender and racial pay equity; investors also engaged on political contributions and lobbying.

Engagement is consequential. Almost 50 percent of the respondents stated that it led to a change in corporate practice. Importantly, the responses show a close link between voting and engagement. First, engagement resulted in the withdrawal of a shareholder proposal for 44.3 percent of companies in the whole sample, for 41 percent of Russell 3000 companies, and for 44.3 percent of S&P 500 companies. Second, approximately four of 10 companies mentioned that engagement resulted in  a change in the proxy vote previously announced by the engaged shareholder(s). Both items suggest that engagement can sway shareholders to support a company’s position on a matter that would otherwise face a close vote. Third, engagement led a significant number of companies to include a director nominee proposed by the engaged shareholder(s) in the slate supported by management: almost three of 10 in the whole sample and in the Russell 3000 sample and a little over two of 10 in the S&P 500 (interestingly, this response peaked at 46.3 percent for companies in the $1 billion-to-$10 billion bracket). 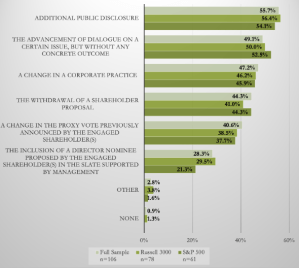 The data above suggest that engagement is effective. One the one hand, it helps companies preempt some shareholder initiatives and avoid publicly losing a vote. On the other hand, engagement can at times help investors in convincing companies to support their director nominees by including them in the slate supported by management. Moreover, it provides a forum for cooperation and idea exchange for all parties involved in issues like climate disclosures – almost 50 percent of respondents cited instances of engagement that resulted in progress on a certain issue, but without any concrete outcome.

This paper comes to us from professors Matteo Gatti at Rutgers Law School and Giovanni Strampelli at Bocconi University – Department of Law, and from Matteo Tonello at the Conference Board, Inc. It is based on their recent paper, “Board-Shareholder Engagement Practices: Evidence from a Survey of Corporate Officers and from Disclosure Data,” to be published as a chapter in the forthcoming book, “Board-Shareholder Dialogue: Policy Debate, Legal Constraints and Best Practices,” and available here.