One of the hottest topics in the business world is ESG ratings, which are designed to measure the environmental, social, and governance risks of a company. The idea is that increased transparency about companies’ ESG risks will motivate those with a low scores to improve and at least match the performance of competitors with high scores. Yet research on whether these ratings actually work is surprisingly sparse.

In a new study, we examined how companies responded to some of the first ESG ratings in the early 1990s issued by KLD Research & Analytics (KLD), a pioneering ESG rating agency. Contrary to expectations, we found that being rated favorably by KLD led firms to reduce their subsequent performance. What caused this decrease and what does it mean for policy makers and rating agencies?

The Origins and Motives of KLD

Prior to the early 1990’s, it was very difficult for interested parties to determine which companies were good corporate citizens. To help fill this void, KLD began to evaluate large public companies (i.e., S&P 500) with the explicit objective of providing information that would help socially conscious investors identify which companies were more or less socially responsible.

In addition to acting as an information intermediary, KLD sought to motivate improvements in corporate responsibility. When asked about his organization’s motives, Peter Kinder, one of KLD’s cofounders noted, “Our interest is to increase corporate accountability. The goal here is to have a long-term impact. I think that’s the big shift in social investing. Historically it was sin avoidance and now it’s another voice for social change.”[1]

KLD rated firms on a number of dimensions, including their role within the local community, their relationships with their employees, and their impact on the natural environment. Our study focused on KLD’s rating of corporate philanthropy. Companies that had given at least 1.5 percent of their pretax profits to charity were rated as generous while those that gave less were not. When asked about this rating, Steven Lydenberg, a cofounder and the principal architect of the ratings, indicated that KLD’s hope was that companies that did not receive the positive rating would then be motivated to increase their level of giving.[2]

Did Rating Firms as Charitable Motivate the Unrecognized to Increase their Giving?

Contrary to KLD’s hopes, we found that being rated as generous by KLD actually led firms to decrease their level of giving by about 25 percent (from above 2 percent on average to about 1.5 percent). Firms that were rated by KLD but whose level of giving did not exceed 1.5 percent appeared unresponsive to the rating. 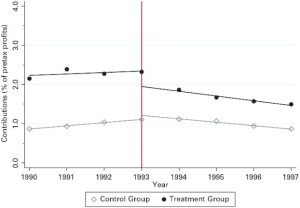 We suspect that these decreases occurred for two reasons: (1) being rated as a generous company was a signal that was incompatible with the notion of shareholder value maximization, the dominant business logic at that time, and (2) managers were wary of the added attention and scrutiny that would accompany the recognition of receiving a high rating.

We show that the difference in giving levels between those that were rated/not rated as generous persisted for many years prior to establishment of the rating, helping us to rule out other common alternative explanations such as mean reversion. 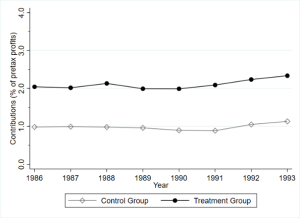 Consistent with prior research,[3] we also found that financial analysts and institutional investors penalized firms with favorable ESG ratings, although they were much slower to respond. This pattern suggests that many firms anticipated that they would be punished and thus reduced their giving to avoid the signal of overinvestment in corporate philanthropy. 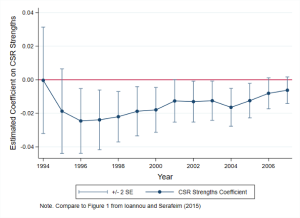 While our study focused on corporate response to a rating over three decades ago, we believe that it provides key insights for policy makers and rating agencies who are interested in motivating improvement in corporate responsibility.

First, our results suggest that ESG rating agencies should carefully consider whether the dimensions of performance that they evaluate are valued by society at large. Rating agencies that seek to recognize certain behaviors that are currently contested by society may inadvertently lead firms to reduce rather than improve their performance by drawing added attention to those behaviors. This concern is particularly relevant in today’s increasingly polarized society as rating agencies often seek to motivate more progressive behaviors that may not be universally valued.

Second, critics have recently raised concerns about ESG rating agencies, questioning both the validity of their evaluations and whether they improve corporate behavior.[4] Our research suggests that companies do indeed respond to these ratings, albeit in ways that were likely unintended.

Given the complexities of social life, we believe that additional research in this area is imperative and hope that our findings inspire scholars to examine the potential benefits and costs of ratings.

[2] Lewis, B. W. (2014). A behavioral view on firm response to ratings: How positive recognition leads to reduction in charitable contributions. Cornell University.

This post comes to us from Ben W. Lewis and W. Chad Carlos at the Brigham Young University Marriott School of Business. It is based on their recent paper “Avoiding the Appearance of Virtue: Reactivity to Corporate Social Responsibility Ratings in an Era of Shareholder Primacy” available here.