Top practitioners, judges, regulators, and scholars gathered at Columbia Law School on December 2 to offer their unique perspectives and cutting-edge insights on a variety of topics related to M&A and corporate governance. The topics included current M&A market trends, the role of institutional investors and shareholder activists in dealmaking, and the impact of the SEC and litigation developments on M&A. 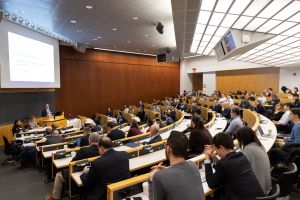 Muller observed that the percentage of transactions involving private equity has been going down every quarter this year, but private equity remains active in general. Valuation of companies is also down, but some investors are taking advantage of the low valuation to run deals.

On cross-border transactions, inbound activity is down significantly from last year, while outbound activity remains high, with a continued increase in tech-related transactions. With respect to antitrust, the panelists pointed out that the Biden administration has focused on regulating M&A deals and has been willing to bring cases that the administration expects to lose but may nonetheless have an impact on case law and convince judges to support antitrust enforcement. Given that regulatory focus, panelists noted that they are seeing more attention to negotiating around commitments to litigate in order to obtain necessary antitrust clearances.

Gordon concluded the session by raising the possibility that we now see “too many mergers.”  In addition to the various external factors that lead to M&A, he argued that in recent years “golden parachute” compensation arrangements have played an outsized role in driving transactions. Golden parachutes were initially popularized in the 1980s to overcome managerial resistance to unsolicited premium offers.  Their function has flipped, however, especially with the added feature of the acceleration of unvested options, which, Gordon argued, now provide CEOs with strong incentives to become a target.  The consequence may be “too many mergers” in light of the interests of shareholders, other stakeholders, and other social interests.

Next up was a panel exploring current topics in shareholder activism, moderated by Professor Eric Talley of Columbia Law School. Panelists included Eduardo Gallardo, corporate partner and global co-chair of the Mergers & Acquisitions Practice at Paul Hastings LLP; Jessica Wirth Strine, managing partner and CEO of Sustainable Governance Partners; Vice Chancellor Lori W. Will of the Delaware Court of Chancery; Gabrielle E. Wolf, director at Innisfree M&A Incorporated; and Ted Yu, chief of the Office of Mergers and Acquisitions in the Division of Corporation Finance at the SEC. Yu discussed the new universal proxy rules implemented by the SEC and among other things highlighted their potential for alleviating undervoting and overvoting. Gallardo, however, pointed out the danger of special interest groups taking advantage of universal proxy to gain leverage over management using a de minimis number of shares. Wolf shared market commentary supportive of this possibility. Will discussed recent decisions issued by the Court of Chancery in connection with proxy contests, including In re Aerojet Rocketdyne Holdings, Inc. She also discussed advance notice bylaws. Other topics discussed by panelists included the proposed amendments to Schedule 13D/G disclosures and the impacts of social activism.

The keynote presentation was delivered by Chancellor Kathaleen St. J. McCormick of the Delaware Court of Chancery and moderated by Jack B. Jacobs, former justice of the Delaware Supreme Court and senior counsel at Young Conaway Stargatt & Taylor LLP.

Later in the day, Professor John C. Coffee, Jr. of Columbia Law School convened a panel to examine current SEC developments bearing on corporate governance, starting with a discussion on the SEC’s most recent climate change disclosure proposals. Panelists included Professor Zohar Goshen of Columbia Law School, Professor Donald Langevoort of Georgetown University Law Center, and Senior District Court Judge Jed S. Rakoff of the Southern District of New York. Goshen shared his research on whether disclosure can reduce carbon emission and concluded with a certain degree of pessimism on the potential effectiveness of the SEC disclosure requirement. After Langevoort shared his insights on the West Virginia v. EPA decision, Rakoff discussed the status and challenges to SEC involvement with administrative law judges. Rakoff expressed concern over whether administrative law judges should exercise such broad power.

At the end of the session, Coffee spoke with William Birdthistle, director of the Division of Investment Management at the SEC about a range of topics, including climate change disclosures.

Professor Joshua Mitts of Columbia Law School led the final panel of the day on recent developments in M&A litigation in Delaware and federal courts. Panelists included Professor Merritt B. Fox of Columbia Law School; Professor Ann M. Lipton of Tulane University Law School; Nelly Merkel, litigation partner at Quinn Emanuel Urquhart & Sullivan LLP; and Elena C. Norman, litigation partner at Young Conaway Stargatt & Taylor, LLP. Merkel started the discussion with a review of trends in litigation involving SPACs.  Describing SPAC litigation as “sitting right in the intersection between securities litigation and M&A litigation,” Merkel explained that the decision of In re MultiPlan Corp. Stockholders Litigation shifted the focus of SPAC litigation to fiduciary duty principles and disclosures. Norman then discussed the “entire fairness” jurisprudence at the Delaware Court of Chancery and commented that one of the themes from recent cases is that the court doesn’t require perfection in processes to find that a transaction is entirely fair. Lipton then discussed two separate developments in Delaware law: the changes of DGCL 102(b)(7) relating to the ability of corporations to choose to exculpate directors and officers and the Lee v. Fisher case, which is pending at the Ninth Circuit.  The panel concluded with Fox’s presentation on his latest research on event-driven lawsuits and securities litigation.

This post comes to us from Tianzi Wu at Paul Hastings LLP.