Do managers seek control of the firm, or the level of ownership consistent with entrenchment? Entrenched managers own shares within a range which is high enough to give them control, but sufficiently low to make other shareholders bear the brunt of their non-value maximizing actions. There is a large literature on how entrenched managers can benefit themselves by extracting wealth from other shareholders, but conclusive evidence that managers seek entrenchment is currently lacking.

One way to proceed is to try to infer the optimal ownership structure from the managers’ perspective from revealed preferences in existing ownership structure. Prior literature finds that the average firm has 18-21% insider ownership, and the range for managerial entrenchment falls between 5-25%.[1] Therefore, the average firm has entrenched managers. However, does this mean that managers seek entrenchment?

No. The chief problem with inferring manager ownership preferences this way is that these cross-sectional statistics are static measures. Although we may find the average manager to be entrenched, entrenchment may simply be a temporary stopping point on the way from high to low managerial ownership. Therefore the interpretation that the manager prefers or finds it optimal to be entrenched may be incorrect. In particular, manager-entrepreneurs who start with a very concentrated ownership structure post-IPO may attempt to diversify their holdings and give up an entrenched position over time. In our empirical study of ownership, we correct for this issue by following managers through the accumulation of ownership from more diffuse to more concentrated. That is, we find at what point management seems to decide it is not worth increasing insider ownership of the firm. This results in a revealed preferences measure for its optimal level from the insiders’ perspective, rather than a static average.

The transition from diffuse to concentrated ownership is particularly important to examine because the trade-offs are very different for insiders based on initial ownership. If a firm begins with concentrated ownership, reducing the concentration level to just above that necessary to maintain control allows management to simultaneously become more diversified and enjoy the benefits of control/entrenchment, if any. On the other hand, for firms that begin with low managerial ownership there are costs to gaining control. As they accumulate shares, they face the trade-off between the personal benefits of control with the costs of reduced diversification and operating performance.[2] This transition from diffuse to concentrated ownership, accompanied with costs of achieving control and entrenchment, will therefore present the more accurate picture of the value of control and entrenchment to the manager. This transition is therefore the focus of our study.

For the typical IPO, initial insider ownership is concentrated. This allows one to examine whether entrepreneurs go from concentrated to diffuse ownership, but cannot be used to address the more important issue of choosing to go from diffuse to concentrated ownership. Previous authors have all examined diffusion of ownership from the IPO forward. For these firms, entrepreneurs and other pre-IPO blockholders reduce their ownership over time. For example, one study finds that mean insider ownership goes from 38.22% in the year of the IPO to 24.57% 10 years after the IPO year.[3]

This set of prior findings is not a sufficiently powerful test of the desire for managers to become entrenched, since it only tells half of the story. Divesting from highly concentrated ownership at the IPO date down to a specific cutoff allows managers to maintain control and simultaneously diversify their personal portfolios. Since typical post-IPO managers begin with concentrated ownership (and therefore entrenchment), there is no additional cost to becoming entrenched. Also, it may simply be a point on a continuous path to more diffuse ownership. A more powerful test is whether managers are willing to bear the cost of lower diversification, by obtaining more shares from a low starting point. This second half of the optimal ownership level story, from diffuse to concentrated insider ownership, is typically difficult to test as there are few cases in which managers start with diffuse ownership and accumulate shares.

We base our study on a notable exception to this pattern: thrift conversions from mutual to stock ownership done through an IPO. In a mutual, the depositors are the owners. Compared to other types of IPOs, ownership is much more diffuse at the IPO date, since there are many relatively small depositors converting to share ownership. Following a large sample of thrift IPOs over many years allows us to perform a natural experiment as to whether the benefits outweigh the costs of entrenchment for managers. Most importantly, our natural experiment isolates the cases when managers have the choice whether to become entrenched or not by starting them from an unentrenched position. 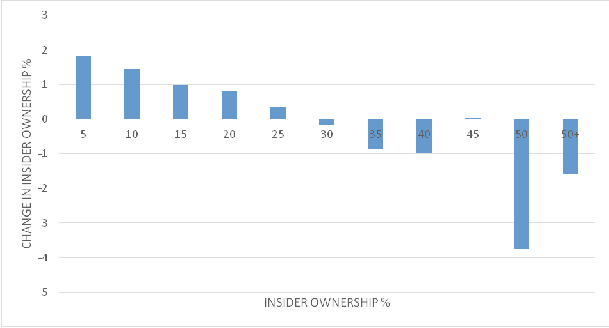 Furthermore, there are distinctive regulations for thrifts that permit additional unique tests of managers’ desire to gain control versus alternative hypotheses for increasing stock ownership. First, Post-Conversion Anti-Takeover regulatory rules prevent hostile takeovers of thrifts for up to five years after the IPO date for a thrift conversion from mutual to stock ownership. Second, after a thrift conversion, a mutual holding company (MHC) may keep a majority of the shares after the IPO.

Our evidence suggests that managers implement a multifaceted plan to become entrenched. They exploit the regulatory environment and use various financial tools in their pursuit of entrenchment. On the regulatory front, insiders time their purchases of shares consistent with the anticipation of the lapse of regulatory anti-takeover protections. That is, managers rapidly accumulate shares in the first five years after a thrift’s IPO, the period during which they are protected from takeovers by the Post-Conversion Anti-Takeover Rule. The thrifts in our sample are very likely to reach levels consistent with entrenchment, and therefore relative immunity from takeovers, just as these regulatory protections expire.

In addition insiders use mutual holding companies as a substitute for direct share ownership, accumulating fewer shares in firms with MHCs as part of the ownership structure. Since the MHC delivers only control, not ownership, this substitution effect implies that insiders value control more than ownership. In particular, we find no evidence that insiders increase ownership to resolve agency problems stemming from the division of ownership and control. Indeed, insiders have lower levels of ownership in thrifts in which an MHC grants them control.

Finally, we examine whether thrift managers’ financial policies are consistent with their evident desire to gain control. We find that thrifts issue less equity, have less liquid shares, and have higher debt ratios – all consistent with managers’ attempts to gain control. Issuing relatively lower amounts of equity and maintaining higher debt ratios results in lower levels of equity. This makes it less costly for managers to obtain a controlling interest of equity. Also, reducing the liquidity of outstanding shares makes it more costly for outside shareholders to obtain control and more expensive for existing shareholders to sell shares.[4] Since insiders may obtain shares directly from the company, they don’t bear the costs of reduced liquidity when accumulating shares.

The fact that we converge on the same 20% to 30% optimal insider ownership range as prior studies when starting from a very different initial managerial share endowment provides strong evidence that this range is indeed what insiders believe to be the optimal level of ownership. Taken together with prior evidence that this is the level necessary to maintain control and entrenchment, and our findings that the speed of convergence to this level is not influenced by potential alternative determinants of insider share purchase, provides strong evidence that managers do indeed seek control and entrenchment.