The role of the corporate general counsel (GC) has evolved over the past several decades. Traditionally, the GC served as an internal monitor via his/her gatekeeping functions to ensure that firms and their personnel acted legally and responsibly in business matters. In this sense, GCs are similar to other gatekeepers who are responsible for ensuring that firms engage in “best practices” (e.g., auditors, safety inspectors, etc.).

Over time, increases in business complexity and regulation have altered the GC’s responsibilities to include more advisory and entrepreneurial tasks. Internal counsel is now expected to expand the role of law and legal practice to generate new sources of growth and gain a competitive edge over competition (Nelson and Nielson, 2000). For instance, recent survey evidence by the Association for Corporate Counsel (2015) suggests that contemporary GCs are required to have a proficient understanding of business management, project management, sales, and marketing to perform key functions. Consistent with the GC’s evolving role, we document that the percentage of S&P 1500 firms in our sample with a C-Suite GC increased from roughly 20% in 1994 to nearly 50% in 2012. The following figure reports the percentage of our sample firms with a C-Suite GC by year.

Although the GC’s evolving role may be necessary in today’s business environment, this is not costless to the firm. Conflicts of interest can arise when GCs de-emphasize their gatekeeping functions. For instance, Ben Heineman, former GC of General Electric, states, “Resolving the tension between being a partner to the CEO and the guardian of the company is at the core of being the General Counsel” (Egon Zehnder International, 2011). Given the GC’s tension between serving a traditional gatekeeping role and serving a contemporary facilitating role, we examine how external market participants, specifically bond market participants, view the GC’s evolving role.

We examine our research question in the context of bond market participants because understanding the composition, ability, integrity, and risk tolerance of senior management is a key attribute of credit risk analysis. These characteristics can significantly impact the firm’s future performance, financial stability, and risk profile. For instance, Ganguin and Bilardello (2005) state “it would be an understatement to say that the role of management is pivotal to a company’s performance and therefore its credit quality.” We find firms that appoint a C-Suite GC experience increases in overall credit risk via increased (i.e., worse) firm-level credit ratings and increased credit default swap spreads. Further, we document bond market participants respond to these appointments quickly by focusing on the one- and two-year periods immediately before and after a GC is appointed to senior management, suggesting our findings are not due to changes in credit risk over time. The following figure displays mean CDS spreads and credit ratings surrounding the appointment of a GC to senior management. The mean CDS spreads (credit ratings) increase 27.1% and 20.2% (0.6% and 1.8%) in the year of and immediately following a GC appointment to senior management. 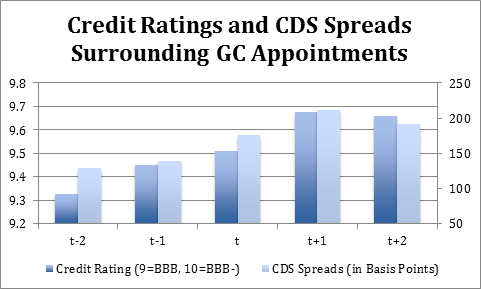 Regulators responded to the concern that GCs reduced their gatekeeping functions and played a role in the corporate failures of the early 2000s (e.g., Enron, Worldcom, etc.). Under Section 307 of the Sarbanes-Oxley Act (SOX), GCs are personally liable for corporate negligence or malfeasance and must report any such behavior “up-the-corporate-ladder” to the CEO, audit committee, and/or board of directors. We find SOX partially reduced the credit risk associated with appointing a C-Suite GC, though it did not completely alleviate bond market participants’ concerns. This is significant as it highlights regulators’ limitations in assigning personal liability to corporate officers and provides some evidence as to why periods of corporate malfeasance occur despite regulatory changes.

Egon Zehnder International. 2011. The general counsel and the board. Experts – The Journal for Practice Knowledge (3).