Unlike most other countries, the U.S. taxes corporations on earnings generated anywhere in the world. This means that U.S. corporations have a strong tax incentive to renounce their U.S. incorporation and redomicile in a foreign country. Enter the inversion, a legal maneuver that has become increasingly popular and politicized in recent years, most notably with the announcement of Pfizer’s plan to move to Ireland as part of its acquisition of Allergan. Although recent rule changes by the Treasury has caused Pfizer to abandon this plan for the moment, inversions will continue to occur because of the tax benefits to the corporation, including reduced corporate income tax rates and access to unrepatriated cash holdings.

Receiving less attention are the tax costs that an inversion imposes on the company’s shareholders.  Because capital gains are taxed only when shares are sold, a taxable investor generally has incentive to minimize her personal tax liability by deferring the realization of capital gains.  In other words, an investor derives value from the tax-timing option embedded in her shares.

In 1996, to discourage U.S. firms from leaving the country, the IRS modified Section 367(a) of the tax code to make inversion a taxable event for shareholders of the U.S. firm. This means that, unlike domestic reorganizations, U.S. taxable shareholders are required to recognize a capital gain at the time of inversion.  Shareholders pay capital gains tax on the difference in the market value of their shares and their personal cost basis, even if they retain their shares after inversion.  In other words, the IRS effectively requires shareholders of an inverting company to forfeit their tax-timing option. 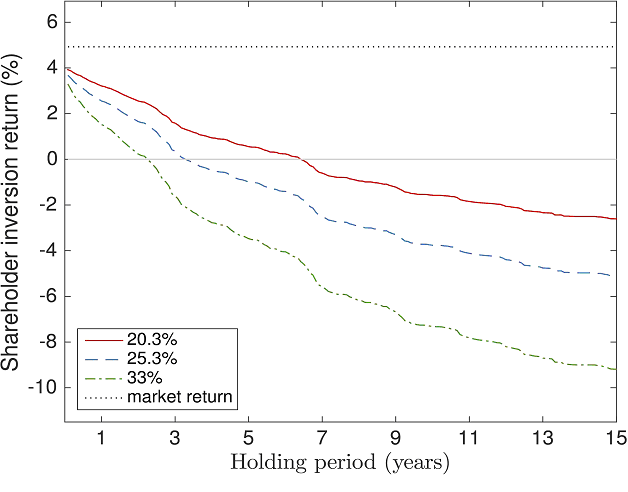 Figure 1: Plots the estimated average return to past inversions based on the shareholder’s holding period, shown for three different capital gains tax rates. See Babkin, Glover, and Levine (2016) for details.

The black dotted line in the figure displays the market return to an inversion, which is the return for the tax-exempt shareholders of the firm.  As the figure shows, taxable shareholders, even those with a positive return, don’t fare as well as those that are tax-exempt.  That is, a company’s inversion may have a significant positive announcement return, but still destroy value for many of its shareholders.

An inversion is also especially costly for older taxable shareholders who had planned to bequeath their shares.  The U.S. tax code allows a free step-up of the basis at death.  Consequently, an inversion can impose significant capital gains taxes on investors who, through a bequest, had planned to avoid these taxes entirely.

From a corporate governance perspective, an inversion poses an interesting dilemma: it increases the wealth of some shareholders while destroying the wealth of others.  In this sense, inversion effects a wealth transfer between the company’s shareholders.  With this in mind, we examine how the personal tax liabilities of the CEO and shareholder base shape the incentive to invert.

We find that CEOs fare significantly better than taxable shareholders in an inversion.  While CEOs, like any other taxable shareholder, are liable for capital gain tax on their equity holdings, they differ in that much of their compensation comes in the form of options, which do not incur this tax.[1]  Therefore, the fact that CEOs hold substantial option compensation increases their private benefit of inversion.  Consistent with this relative tax advantage of options, we find that companies with CEOs who have higher equity, as opposed to option, holdings are less likely to invert.

We also show that the tax status of the shareholder base matters for a company’s inversion decision.  Specifically, inverting companies are held disproportionately by foreign and tax-exempt investors, who are exempt from the personal tax costs of an inversion.  This suggests a tax-clientele effect where nontaxable shareholders either self-select into ownership of firms likely to invert or use their ownership to advocate for inversion.  Thus, inversion seems to benefit a majority of shareholders, but is against the interests of a significant portion of taxable U.S. investors.

From a corporate governance perspective, inversion is an unusual situation where corporate action can benefit some shareholders while hurting others.  Despite the harm imposed on some shareholders, we find that an inversion increases shareholder wealth in aggregate.  Thus, foregoing an opportunity to invert doesn’t avoid the problem of shareholders’ conflicting interests.  This highlights the fact that differences in personal taxes can misalign the incentives of investors holding otherwise identical securities.  Moreover, the dilemma posed by inversion raises interesting questions regarding the fundamental nature of the fiduciary responsibilities of a company’s management and directors.

[1] Following 2004 regulation and the addition of section 7874 of the tax code, an additional cost to executives and directors following inversion is a 15% excise tax on certain stock and option compensation in the 12 month period around the effective date of inversion. However, it is common for the board to reimburse covered individuals for these costs, negating the incentive intended by the original legislation.

The preceding post comes to us from Brent Glover, Assistant Professor of Finance at the Carnegie Mellon Tepper School of Business, and Oliver Levine, Assistant Professor of Finance and Patrick A. Thiele Fellow in Finance at the University of Wisconsin – Madison, School of Business.  The post is based on a paper they co-authored with Anton Babkin, PhD Student at the University of Wisconsin – Madison, Department of Economics, which is entitled “Are Corporate Inversions Good for Shareholders?” and available here.