In recent years, activist investors and the companies they target have attracted considerable attention—in the press, in the business and legal communities, in the political arena, and in academia. The fundamental question under debate is whether activist interventions create or destroy firm value. We have conducted a study of the issue, available here. Our sample includes thousands of activist campaigns conducted over the two decades from 1994 to 2014. We examine five types of evidence: stock market reactions, analyst recommendations, short sales, financial statement fundamentals, and institutional ownership.

We find the initial market reaction to the announcement of an activist campaign is sizable, with the target’s stock price rising an average of about 4.5 percent. Most of this return occurs during the week before and the week after the announcement, which is usually made by filing SEC Schedule 13D. Importantly, we find the positive return around the announcement does not reverse and, in fact, increases considerably over the two subsequent years. The magnitude of the market reaction is strongly influenced by the objective of the activist’s campaign. If the objective is to put the company (or part of it) up for sale, the average announcement return over three weeks is an eye-opening 17 percent. For non-sale campaigns, the corresponding return is still sizable at 3.5 percent, with the largest returns for changes in corporate strategy at 6.7 percent (the category includes a return of capital by increasing stock buybacks). Interested readers can find a detailed breakdown of returns by activist objective on Tables 2 and 3 of the study.

Critics of activist shareholders are often skeptical about relying on market reactions to assess whether activist demands add or detract from the long-term value of the companies targeted. The study therefore also examines how selected market participants respond to the intervention. Specifically, we consider reactions by analysts, short sellers, and institutional investors. In examining their behavior, we compare reactions at companies targeted by activists to reactions at companies with similar characteristics that were not targeted by an activist (control firms). This research design is needed to reduce the likelihood that any changes we observe in the behavior of these market participants would have occurred even without the intervention by an activist. 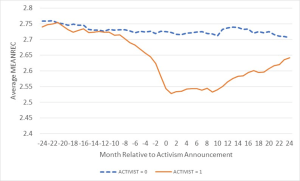 Next, we examine short selling around the activist announcement. Short sellers profit on bad news, and several studies have found short sellers to be informed traders who, in a variety of settings, are able to anticipate future declines in shareholder value. We find that short selling increases modestly at target firms in the year leading up to the activist announcement, but, consistent with analyst recommendations, starting in the month of the announcement, the trend reverses and short sales decline. Trading by short sellers indicates they do not believe the equity is overpriced after the price increase around the announcement. Therefore, both analysts and short sellers expect an improvement in the target firms’ future performance following activist interventions.

We also examine accounting results before and after activist campaigns, using a summary measure that combines nine financial statement fundamentals to create a broad, composite measure of financial health. We find that both activist targets and control firms experience declines in fundamentals before the activist campaign, but the decline is greater for companies that are activist targets. In fact, we find that targets have statistically lower fundamental scores in the year of the campaign. Financial statement fundamentals for target firms then improve to the extent that the targets have statistically higher fundamentals after two years.

In summary, our study considers several types of evidence, and each shows that interventions by shareholder activists add to the value of target firms. As the activist landscape continues to evolve, these results should be of interest to boards and managers as they engage with activist shareholders who push for changes, and to regulators and legislators who are considering actions that may reduce incentives for activists to intervene at under-performing companies.

This post comes to us from Professor Edward Swanson and Ph.D. candidate Glenn Young of the Mays Business School at Texas A&M University. It is based on their paper, Are Activist Investors Good or Bad for Business? Evidence from Capital Market Prices, Informed Traders, and Firm Fundamentals, available here.