Does the quality of legal and other institutions make a difference to economic development and growth? In their very well-known studies of the relation between law and finance, Andrei Shleifer and his collaborators (in particular Rafael La Porta and Simeon Djankov) found evidence to support this claim. Their econometric analysis showed that higher levels of shareholder and creditor protection were correlated with increased financial development. This work became highly influential among researchers and policy-makers. Since the mid-1990s, the widespread belief has been that strengthening shareholder and creditor rights will lead to improved financial outcomes.  This view became a mainstay of global policy initiatives, including the World Bank’s Doing Business reports and the OECD’s Principles of Corporate Governance, and of many national law reform programs, particularly those in developing countries.

However, later empirical research has cast doubt on the claim that law matters for finance. In the study on which this post is based, we use newly available data on laws relating to shareholder protection to assess the impact of legal and regulatory changes on stock market development in 28 countries. We also use time-series and panel data econometric techniques to investigate the existence of a reverse-causal relationship, meaning changes in finance may have driven legal reform, rather than the law driving financial development.

The paper finds that the extent of legal changes affecting shareholder rights since 1990 has been considerable. It also reveals a common pattern across developed and developing countries.  Shareholder rights were strengthened more or less everywhere and particularly in middle-income countries, with Russia and China taking the lead in adopting pro-shareholder reforms: 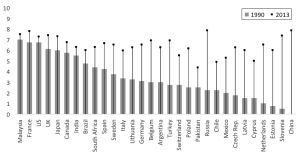 Certain types of laws and regulations were more important than others in this process.  In our data, the two indicators showing the sharpest upward movement (reflecting increases in shareholder protection) were those relating to takeover bids and board independence: 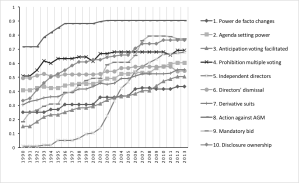 Did the strengthening of rights have the intended effects?  Our econometric analysis indicates only equivocal evidence of a positive impact of shareholder protection on the most widely used measures of stock market development at country level, meaning stock market capitalization as a proportion of GDP, the volume of shares traded, and the turnover ratio.  The evidence is equivocal because we use a number of different regression models to deal with the uncertainties inherent in a large, cross-national panel dataset – unobserved country-level differences, or, to invoke a familiar phrase, “unknown unknowns”. When we do this, we do not consistently see a positive and statistically significant sign in the resulting correlations. This can be read as implying that the impact of increasing shareholder rights is not uniform across different countries and time periods; country-specific factors mediate the effects of legal reforms.

In relation to another much-used metric, the number of listed companies per million of population, our analysis shows a negative impact of increased shareholder protection, that is, a reduction in stock market listings. A possible explanation is that you can have too much of a good thing: Shareholder rights laws impose regulatory costs on firms, and may reduce managerial autonomy and discretion beyond the point where it is efficient to do so.  This would be a counter-productive outcome.

Alternatively, increases in shareholder protection, empowering minority investors, may lead to less efficient firms exiting the listed company sector as a result of a higher incidence of takeovers and mergers. Voluntary de-listings may also become more prevalent as the compliance costs of listed firms increase.  These effects would be more benign.

We also see evidence of reverse causality, in the sense of stock market development at country level generating changes in shareholder protection law. This effect outweighs its opposite, the impact of law on financial development.  We get this result by using Granger causality tests – statistical tests designed to determine causation – of a kind well suited to the long time series that our datasets provide.

When we see strong evidence of reverse causality, we are observing, again, the importance of country-specific factors.  It is likely that legal reform in favor of protection for minority shareholders is being driven by factors that include the rise of the middle class in emerging markets. We may also be seeing the impact of government policies designed to attract foreign investment to developing countries and to retain it in developed ones.

Thus the belief that corporate law reform leads to financial development, a core part of the policy of the international financial institutions since the mid-1990s, is only partially borne out by our research. The emerging picture is, on the one hand, that of the endogenous development of corporate law in response to trends in national financial markets, and, on the other, of a transmission mechanism linking legal reform to economic outcomes that is incomplete at best, and may have some unexpected or counter-productive results.

It may be misleading to think of the relationship between legal change and financial development in linear terms.  Legal reforms are likely to be stimulated by endogenous demand for property rights protection, rather than operating as a wholly exogenous force, shaping economic outcomes.  Over time, legal and financial systems evolve together, with changes in one triggering a response in the other.  The weight of evidence, however, is that finance influences law more than the other way around. Thus, we can characterize these reciprocal effects as asymmetric.

Where does this leave policy? The main take-away from our research is that legal reforms driven by global standards such as those of the World Bank and OECD do not straightforwardly translate into improved financial outcomes at country level. Where changes to the laws of a given country are triggered by external factors, such as the influence of international standard-setting bodies, the presence of endogenous demand for investor protection, coupled with complementary institutions at country level, will make a difference to the effectiveness of the law in practice, and hence to financial outcomes.

Thus, our research may serve as a cautionary message to policy-makers on the limits of what can be achieved through transnational harmonization initiatives. We also suggest that more work needs to be done on understanding the institutional conditions needed for legal reforms to be translated into financial development at country level. We will need empirical analyses which are sensitive to country-level effects of the kind that are not easily observed in large panels.

This post comes to us from Simon Deakin, director of the Centre for Business Research (CBR), University of Cambridge; Prabirjit Sarkar, visiting fellow at the CBR; and Mathias Siems, professor of law, Durham University. It is based on their recent paper, “Is There a Relationship Between Shareholder Protection and Stock Market Development?”, available here.