From the New Deal until the 1970s, banks were on a tight leash. Regulators controlled the rate of interest they could pay on deposits. Banks could not underwrite or deal in corporate securities. With some exceptions, they could not expand geographically.

These restrictions were gradually eliminated beginning in the 1970s. Simultaneously, banking grew riskier. From the end of World War II to 1970, bank failures were virtually nonexistent. From that time on, the U.S. experienced waves of bank distress culminating in the financial crisis of 2007-09.

It is tempting to conclude that the deregulation caused the instability. I believe, however, that this confuses correlation with causation. The evidence supports a different causal story:  Macroeconomic instability unrelated to banking regulation made banks riskier. Regulators responded by loosening regulatory restrictions that were viable in an era of stable inflation and interest rates but had become untenable during the Great Inflation of the 1970s. This post will provide a brief summary of the argument that regulatory change did not cause the end of the “quiet period” of low-risk banking and, in particular, did not cause the financial crisis of 2007-09.[1]

The 1944 Bretton Woods agreement established a system of pegged exchange rates in which many developed countries agreed to maintain a nearly fixed exchange rate between their currencies and the U.S. dollar, and the U.S. agreed to allow foreign governments and central banks to convert dollars to gold at a fixed rate. The system imposed a degree of discipline on the signatories’ fiscal and monetary policies. Should a country spend excessively or hold domestic interest rates too low, it would find it difficult to maintain its currency’s tie to the dollar or, in the case of the United States, to gold.

For a 20-year period beginning in the late 1940s, the United States experienced extraordinary macroeconomic stability while operating within the constraints of the Bretton Woods system. The federal budget and current account were roughly in balance. Inflation averaged less than 2 percent per year. Interest rates were low and stable. The yield curve sloped persistently upward, allowing banks to borrow short, lend long, and make a consistent and predictable profit.

In 1971, however, facing growing inflation, a current-account deficit, and outflows of gold, President Nixon decided to sever the dollar’s link to gold. For the next 10 years, the annual increase in the Consumer Price Index would average 8.7 percent.

The United States was not the only country to experience a quiet period followed by tumult. This chart, reprinted from my above-cited article, shows median inflation rates, in percent (dashed line) and the percentage of countries experiencing banking crises (solid line) for more than a century in 66 countries accounting for over 90 percent of world GDP, courtesy of Carmen Reinhart’s web page: 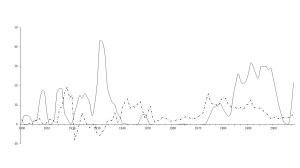 Source: Reinhart and Rogoff, This Time is Different

I hope this simple chart is enough to persuade the reader that the quiet period was not primarily a function of U.S. banking regulation. It was a global phenomenon among countries with widely divergent regulatory systems.

It is also somewhat misleading to call what happened in the 1970s and 1980s “deregulation.” The number of regulatory restrictions to which banks were subject grew steadily during both decades. The principal change was in the method of regulation. In banking, as in transportation, communications, and other fields, the United States abandoned the attempt to segment markets and restrict competition within each balkanized sector. Instead, banks would be subject to safety-and-soundness regulation through capital and other prudential requirements.

In a series of thoughtful and carefully researched articles summarized in a companion blog post, Professor Arthur Wilmarth argues that the regulatory changes that began in the 1970s were not inevitable. On the specifics, he is clearly correct: Congress and regulators made choices and might have made different ones. The regulatory system we had just prior to the 2007-09 financial crisis was not the inevitable result of economic forces.

But I remain convinced that I’m right on the big picture: It’s a Wonderful Life-style banking (taking demand deposits paying 0 percent and savings deposits paying 2.5 percent, making mortgage loans paying 5.5 percent, pocketing the difference and going home at 3:00) existed because it was a wonderful economy. It was inevitable that banking would become different, and riskier, once that environment changed. The details might have come out differently, but change and additional risk were unavoidable.

Why did banks suddenly and more or less simultaneously become interested in mortgage securitization and securities and derivatives activities? They wanted to reduce the risks of the maturity transformation banking model, primarily by substituting fee-generating activities for interest rate spread-generating activities. Securitization allows banks to earn fees for originating and servicing mortgages while shifting interest rate and prepayment risk to investors. Securities brokerage and underwriting generate fee income, which banks thought would be less volatile than interest rate spreads. Swaps allow banks to hedge interest rate and exchange rate risks and to earn a bid-ask spread by making markets.

From the late 1980s through the early 2000s, macroeconomic volatility again declined, producing the so-called Great Moderation. In principle, regulators could have responded to the reduction in risk by dialing back the new powers banks had obtained. As Professor Wilmarth correctly notes, however, Congress instead enshrined them into statutory law.

Banks responded to the more benign interest rate environment by shifting activity back to borrowing short and lending long. Instead of whole mortgages, however, they held (theoretically) less risky AAA-rated tranches of mortgage-backed securities and CDOs. Shadow banks got into the game as well.  Instead of retail deposits, they financed their mortgage-related holdings through repo and commercial paper.

Banks, regulators, and economists all concluded that this new form of maturity transformation was safer than the old form because banks now had the tools to manage interest rate and prepayment risk. Moreover, thanks to geographic diversification, subordination, and other credit protections, the senior securities were default-proof unless housing prices declined nationwide by double-digit percentages, something that had never happened before.

Unfortunately, it did happen beginning in 2006. Short-term creditors of financial institutions came to doubt the value of even AAA-rated collateral. In the event, securitized mortgages performed as designed. A recent analysis finds cumulative realized losses of about 2.3 percent on AAA-rated RMBS through 2013. But even this was too much for short-term lenders: If you have the right to exit immediately at 100 cents on the dollar, it is entirely rational to do so rather than roll over your short-term loan and risk losing even a couple of cents. As a result, the trading prices of these securities fell dramatically as financial institutions rushed to liquidate them to pay back short-term creditors.

Could Congress have prevented the financial crisis by refusing to enact the Gramm-Leach-Bliley Act of 1999 (GLBA), which permitted universal banking? I am unconvinced that universal banking was a major cause of the crisis. The first systemically important institutions to come to grief, Bear Stearns, Lehman Brothers, and Merrill Lynch, were stand-alone investment banks.

Indeed, here’s the irony: Had Glass-Steagall never existed, stand-alone investment banks might not have existed either. We would more likely have had a system of universal banks engaged in lending, deposit taking, and securities and derivatives activities. If so, Lehman, et al. would have had access to insured deposits and the Fed’s discount window and been subject to prudential regulation by banking regulators (the SEC is an investor protection agency, not a prudential regulator; its brief foray into the latter did not go well.) Would this have prevented these entities from getting into so much trouble? Maybe not, but at a minimum, the Fed and FDIC would have had much clearer authority to intervene when they did get in trouble.

How much is securitization to blame for the crisis? In the mid-2000s, lenders extended mortgage credit based on housing values rather than borrower ability to repay.  Investors readily purchased the resulting securities, believing that residential real estate prices could not decline as sharply and widely as in fact occurred.

One common explanation for this phenomenon is misaligned incentives: Banks didn’t care about the quality of the mortgages they originated because they planned to sell them off. The weakness in this explanation is that the same banks that originated subprime loans and the same investment banks that underwrote subprime RMBS and CDOs also invested heavily in these securities. Had subprime lending been driven primarily by misaligned incentives, originators and underwriters would have shunned the asset class in their own investment accounts.

Why did mortgage originators make so many subprime loans during the mid-2000s? The reach for yield at a time of low interest rates was a factor. So was government pressure on banks and the GSEs to facilitate home ownership among low-income households. Another simple factor, which also helps explain the global dimension of the crisis, was that the global demand for AAA-rated, dollar-denominated assets exceeded the supply. Trade and investment imbalances led investors in China and other countries to search for dollar-denominated “safe” assets. For centuries, financial institutions have used real estate as collateral for obligations that are thought to be “safe as houses,” and they did so in the run-up to the crisis.

All of these factors have some explanatory power. I do not, however, believe that GLBA or a decades-long deregulatory wave were important contributors to the crisis.

This post comes to us from Paul G. Mahoney at the University of Virginia School of Law.