While there is a growing debate in the United States about a shift from public equity markets to private ownership models, Asian stock exchanges are steaming ahead. Last year a record 1,074 companies got listed in the region, and 43 percent of all capital raised through primary equity markets globally went to Asian companies. This is more capital than U.S. and European companies raised combined  and more than double the share of the global total raised by Asian companies 20 years ago. 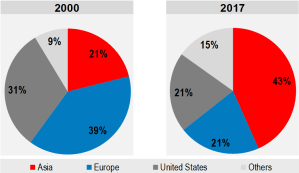 Needless to say, China is an important part of the story. But it is by no means the whole story. During the last decade, countries like Thailand, Vietnam, Singapore, and Indonesia have all had more IPOs than advanced economies such as France, Italy, and Germany. And as a matter of fact, during the last 10 years, 11 out of the top 20 markets in terms of number of IPOs are in Asia.

Another part of the picture is the low levels of so-called “growth company” listings in the U.S. and Europe. While the definition of growth companies varies, these smaller size IPOs are typically meant to include companies that have a potential to develop as independent entities that can challenge the status quo and contribute to the rejuvenation of the corporate sector.

In the U.S. and Europe, these smaller IPOs below $100 million have been quite weak, and that has contributed to an overall decline in the number of listed companies. Different explanations have been offered for this, including an increased dominance of institutional investors and index investing favoring large companies with liquid stocks, increased compliance costs for listed firms, changes in tick size. and lack of analyst coverage. It has also been suggested that an increase in private ownership models and acquisitions by large firms have added to the drying up of the pipeline of smaller company IPOs in the U.S.. Whatever the explanations, the trend has been significant enough to draw political attention, and initiatives like the JOBS Act have been launched in both the U.S. and Europe in attempts to reverse the trend.

In Asia, the situation is again quite different, not only in the emerging markets but also in advanced economies like Japan and Korea, where the share of IPOs below $100 million in total issuance volume remain notably higher than in the U.S. The real outlier however is China, which recently has experienced a sharp increase in smaller IPOs. And in 2017, Chinese IPOs below $100 million reached levels that the U.S. has not seen since the late 1990s. While several of these newly listed companies in China may again delist, merge, or just remain small, some of them will probably grow and be with us for quite some time, perhaps as fixtures in a standard indexed portfolio held by the large institutional investors and asset managers. That was the case with Amazon, which did a $62 million IPO in 1997.

Figure 2. IPOs by Chinese and US non-financial growth companies

While institutional ownership in Asian emerging stock markets is still limited, a number of initiatives are underway that will alter the landscape. These include the Stock Connect programs between mainland Chinese markets and the Hong Kong Exchange providing international investors access to the mainland market and mainland investors access to trade companies that are listed in Hong Kong. We also have to anticipate the longer term effects of the recent inclusion of Chinese A-shares in the MSCI emerging market index. Already after a limited inclusion of just 5 percent of A shares during the Summer of 2018, Chinese stocks, including H shares listed in Hong Kong, already accounted for around 31 percent of the index. According to recent calculations by MSCI, a hypothetical 100 percent inclusion would increase the weight of Chinese shares to 42 percent. The MSCI initiative is likely to be followed by inclusion of Chinese stocks and corporate bonds also by other index providers.

Since equity market indices are routinely used by a growing number of institutional investors and asset managers, this will successively change the investor landscape in China’s mainland market and increase the ownership stakes that are held on behalf of ordinary households in advanced economies. This development may be further fueled by the fact that some large institutions are reaching uncomfortably high levels of ownership in companies  in advanced markets that are experiencing a decreasing number of listed firms. Some of the institutions may indeed seek to solve this dilemma through various forms of non-listed private ownership models. But a large number of them with vasts amounts of money to invest will still be bound by investment mandates, investment products, or risk strategies that require investments in listed companies.

All said, it is apparent that the growth of Asian stock markets will have global implications. From an economic perspective, the most obvious one is that corporations in the region will be able to source capital from a much larger pool of investors. And the mirror image is of course that institutions from advanced economies can seek investment opportunities and diversification possibilities on a grander, global scale. Asian stock market growth will also bring a range of additional business opportunities related to capital markets, something that will further drive integration and international interdependence. One example that is provided in the OECD Equity Market Review of Asia is investment banking activities such as equity and bond underwriting, syndicated loans, and M&A services. Ten years ago, Asia’s global share of such deals was around 10 percent. Today its share of M&A activities has more than doubled, while Asia’s share of corporate bond issuances has tripled to 32 percent.

An important consequence of increased interdependence is the need to understand the merits of different corporate governance and ownership practices. So, in addition to the great diversity of corporate governance arrangements that already exist in advanced markets, we now have to add the implications of state-ownership and company group structures that often are important features of Asian listed companies. There are also some interesting developments that are driven by the exchanges themselves, with both Singapore and Hong Kong opening up to the use of dual class voting rights. Also, China recently announced its intention to create a new market for smaller technology companies, allowing flexible arrangements with respect to their governance structure.

It is logical that corporate governance practices evolve over time as new corporate structures emerge, investment practices develop, and new categories of owners, such as highly sophisticated institutions, increase in importance. And in this process, there is always scope for mutual learning. A good basis for that policy dialogue is the G20/OECD Principles of Corporate Governance, which have been endorsed by countries hosting all the largest stock markets, including the U.S., China, UK, and Japan.

[1] OECD Capital Market Series dataset is based on transaction or firm-level data gathered from several financial databases, such as Thomson Reuters Eikon, Thomson Reuters Datastream, FactSet, and Bloomberg as well as regulator, stock exchange, and company websites and financial statements. A set of selected indicators and detailed description of data sources as well as the methodology for data collection are provided in the annexes to the OECD Equity Market Review of Asia 2018.

This post comes to us from Mats Isaksson, the head of corporate governance and corporate finance at the Organisation for Economic Co-operation and Development (OECD), and an advisory board member of the Millstein Center for Global Markets and Corporate Ownership at Columbia University. The post does not represent the official views of the OECD or of its member countries. The opinions expressed and arguments employed are those of the author.