Many managers receive company stock as compensation and then pledge that stock as collateral for personal loans. The practice is increasingly common, and its potential economic impact is anything but negligible. For example, Larcker and Tayan (2010) document that pledged shares by 982 directors in 2006-2009 averaged 44 percent of the total shares received as compensation. In addition, the damage to firm value from managers’ failure to meet margin calls can be significant, as shown by lenders’ liquidation of pledged shares of Valeant Pharmaceuticals. In November 2015, Goldman Sachs sold more than $100 million of shares pledged by Valeant CEO Michael Pearson to secure a $100 million dollar loan made in April 2015. The liquidation of the shares prompted the company’s market value to drop by almost 20 percent (Financial Times, Nov. 6, 2015).

In 2013, proxy adviser Institutional Shareholder Services (ISS) designated share pledging as a “problematic pay practice.” Proxy advisers typically provide research and voting recommendations to institutional investors, especially passive investors, on how to vote on director nominations and corporate governance questions. ISS encourages companies to adopt an anti-pledging policy by stipulating that “if the company indicates that they have a policy that prohibits future new pledging and/or that they are encouraging executives/directors to unwind current pledging transactions, these would be viewed as positive factors that could mitigate a negative recommendation on director elections.”

We examine the contractual and managerial consequences of adopting an anti-pledging policy that strictly prohibits managers from pledging the equity shares of their respective firms and therefore limits the flexibility of their equity compensation.  In addition to obtaining liquidity without selling their shares, pledges allow managers to pursue potential personal benefits, such as diversifying their wealth portfolios, deferring tax liability, and mitigating litigation concerns. However, despite the clear benefits for managers, share pledging has come to be seen as a governance problem among regulators, proxy advisers, and institutional investors. These parties have expressed concerns over the disconnect between the interests of managers and the interests of shareholders and the potential failure to meet the margin call, which may trigger a sharp stock price drop (Dou, Masulis, and Zein, 2019). 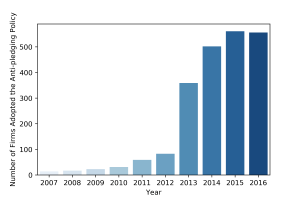 We offer new insights into proxy advisers and corporate governance policy. While proxy advisers are often criticized for perceived conflicts of interest (Belinfanti, 2010), evidence on the costs of following their recommendations is limited. By empirically showing the influence of ISS’ recommendation on the adoption of anti-pledging policies and the downsides of adoption, our study suggests that catering to proxy advisers may result in unintended outcomes for the firm and calls into question the benefit of a one-size-fits-all approach to corporate governance.

This post comes to us from professor Jihun Bae at Erasmus University Rotterdam and Ruishen Zhang, a PhD candidate at Frankfurt School of Finance & Management. It is based on their recent article “Anti-Pledging Policy, CEO Compensation, and Investment” available here.