In a series of papers over the past decade, the three of us have studied extensively the persistence of obsolete terms in sovereign debt contracting. (e.g., here, here and here).  Our interest was motivated by a puzzling observation: Transactional lawyers did not appear to reform their contract clauses promptly in response to changes in the external environment.  In a market with multi-billion dollar transactions, and with some of the most elite law firms in the world, the slow pace of innovation was surprising.  It was especially surprising given the conventional view that good transactional lawyers keep abreast of the latest developments in the case law and modify their contracts to protect clients from subsequent surprises in litigation.  At least in the sovereign debt area, real world contracting dynamics did not resemble the drafting process that legal and economic theory predicted.

As we have discussed in a prior blog post on this site (here), we faced a frequent question in presenting this research: Are your findings idiosyncratic; limited to the world of government debt?  Frequently that question would come from an M&A specialist who would offer the following explanation for why M&A transactions were different from sovereign debt: These bond issuances are repeat transactions characterized by dispersed and disinterested principals (the citizens of the country in question on one side and investors on the other); similar problems would not appear in high level M&A transactions, and especially private equity M&A deals where the principals pay much more attention to the deal terms.

Fair point, we had to concede, since we didn’t know much about the world of elite M&A.  But this struck us as an empirical question worth investigating.  Were the rates of innovation really different across different practice areas?  To begin to answer that question, we set out to compare corporate and sovereign bonds (routine transactions that reproduced prior documentation with minor changes) with private equity M&A agreements (where each deal requires a tailored contract).  The difference between these two environments can be framed in terms of agency costs. The world of sovereign or corporate bonds is arguably vulnerable to agency problems. In these bond deals, only the agents for the investors (the investment banks and their lawyers) are present at the contract drafting stage. We conjecture that the agents have strong interests in getting the deals done quickly.  As a result, they have incentives to refrain from changing prior documentation that has worked in the past and that the counterparty is unlikely to challenge. In contrast, the world of M&A, and particularly private equity M&A, is far less vulnerable to these agency problems. In a private equity M&A deal, the clients – the buyers and sellers – are engaged at the drafting stage and have a strong interest in having the right terms in the deal.  Moreover, the private equity M&A bar is small and relatively well coordinated — holding regular meetings to discuss common contract terms and best practices – with a much greater level of interaction than we had seen in our years studying the sovereign debt world.

The flip side of innovation — adding new language to deal with fresh problems — is encrustation: Language that was useful in prior deals but is no longer relevant remains in the contract while additional words are added.  The result is to undermine the intelligibility of the contract.  International lending guru, Philip Wood, has analogized these encrustations to barnacles, brainless creatures that attach themselves to objects like a ship’s hull. As more such creatures accumulate on the hull, the ship loses its effectiveness. Much the same dynamic could be occurring with contracts. In our prior research we found that innovation sometimes required the removal of an encrustation that otherwise would risk an unexpected interpretation in litigation.  Thus, we decided to look at the comparative rates of encrustation as well.

To compare across these practice areas, we needed a contract clause that was common across the different areas and where the evolving case law called for a simple change (e.g., the removal or addition of a few words) in all the areas.  The reason we looked for a simple change was to deflect the argument that making the change was more salient in one area than another.

Drawing largely on the work on M&A guru Glenn West (of Weil Gotshal) and University of North Carolina contracts specialist John Coyle, we found our target clause: the governing law provision.  West and Coyle, in practitioner and academic journals respectively, had written about aspects of the typical governing law clause that were (a) problematic in light of the case law and needed to be revised (“innovations”) and (b) often contained unnecessary verbiage (“encrustations”).

To conduct a horse race on the speed of innovation, we needed a contemporary problem with the formulation of the basic clause that had been widely noted in the practitioner literature.  The ready candidate was the failure of many governing law clauses to specify that, in addition to the contract being governed by the law of the chosen state, any non-contractual matters relating to the agreement were also governed by that state’s law.  Failure to include non-contractual issues might lead courts to apply a different law to matters such as fraud claims that occasionally arise in contract disputes.  This omission and the need for revision was articulated in a series of articles by prominent lawyers across a range of practice areas in the period 2009 to 2013.

We collected data on governing law clauses in four different practice areas — private equity merger and acquisition contracts, high yield corporate bonds, low yield corporate bonds, and sovereign bonds — for the period 2010-2020.  Since the warnings in the practitioner articles alerting lawyers to revise their clauses were issued in the 2009-13 period, we expected to see clauses start to change at least after 2013 (if not earlier).  The four panels of Figure 1 illustrate what we found on the pace of innovation.  In the private equity M&A contracts there is a sharp increase in innovation in the post-2013 period.  In the other four areas, there is basically no change.  So, at first cut, private equity M&A lawyers seem to be measurably faster at innovating than their colleagues elsewhere.

Figure 1: Innovation Rates (Use of the Noncontractual Term) Across Practice Areas 2010-20 (Percent of Deals with the Innovation in Each Year) 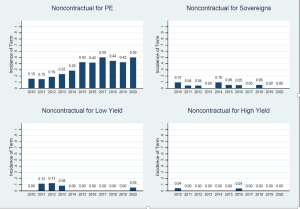 But what about encrustations? Drawing from the work of John Coyle, the leading academic expert on governing law clauses, we identified roughly a half dozen encrustations that are found in many governing law clauses.  For example, there is no meaningful difference between saying that “the agreement is to be governed according to the law of New York” and “the agreement is to be governed, construed, and interpreted according to the law of New York.”  The words “construed” and “interpreted” in the second version of the clause are unnecessary surplus.  We assume that many drafters retain them because they were found in the precedent contract that was used as the model for the current one. Coyle’s research on the history of the governing law clause tells us that those words are historical relics.  In other words, they are encrustations.  Figure 2 reports the data on encrustations across our four practice areas. The question is: Are the M&A lawyers better here as well?

Figure 2: Encrustations (in the Governing Law Clause) Across Practice Areas 2010-20 (Average Number of Encrustations in Deals, for Each Year) 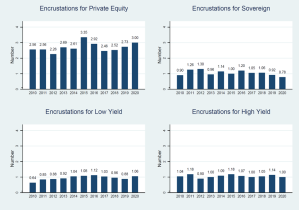 As the four panels of Figure 2 show, the M&A contracts have more encrustations than the contracts in the other practice areas. So, what we have is that the M&A lawyers are faster than lawyers in other areas at responding to the need to revise their clauses, but they also have more useless verbiage in their contracts.

What’s going on here?  The data suggest that there may be different drafting dynamics across these different practice areas. The M&A documents do seem to respond more to external information about the need for change, but they also accumulate unneeded verbiage.  Our conjecture is that these results can perhaps be explained as a function of the contract drafting process.  In a world where a contract is drafted from scratch, one would expect to see only the base language necessary to convey a concept. But we all know that few contracts are drafted from scratch; instead, they are created by modifying prior documents.  Suppose innovative revisions to a contract are made as a part of a borrowing process where the relevant language is initially copied verbatim from another document.  If this is the contract drafting method, then unneeded verbiage that was in that prior form is also likely to be borrowed and included in the new clause along with the innovation — the additional language that was introduced in response to the warnings about the need for change.

So, are M&A lawyers better contract drafters?  They do innovate faster, but their contracts also accumulate more debris. It is tempting to say that only the innovations matter. After all, what is the harm from a few extraneous words in a contract? But harmless extra words can on occasion turn deadly (especially when no one remembers their origin) when a strategic litigator argues for an unexpected meaning.

We presented this research at the M&A section of the most recent ABA meetings. We were mistaken if we imagined that the lawyers there would react with pride that they were the better innovators.  Instead, they expressed dismay that, as of 2020, only 50 percent of the M&A governing law clauses had been repaired.  As for causal mechanisms, they found the coordination story more appealing than the agency cost story.  We were told that the private equity M&A bar is highly coordinated and improving the drafting of contracts to take into account developments in the case law is a key role played by certain subcommittees.  As for the encrustations, the meeting participants were not surprised: So long as these encrustations were not causing obvious problems, it was unlikely that busy transactional lawyers would spend time cleaning them up.  And that was so even though the phenomenon of clever litigators using these surplus words to make creative and unexpected arguments was known.  Moreover, they explained to us, changing words in deal document requires explaining the reasons for the change to the other side – and no one wants to waste time doing that in a world where speedy deal completion is often a paramount goal.

Why care about the processes by which contracts are produced and revised?  As scholars and teachers of contract law, it interests us. But there is an instrumental reason as well: Courts incorporate assumptions about the contract production process into their theories and methods of interpretation.  In interpreting a contract among highly sophisticated parties, courts assume that all of the words in the contract are there because the parties chose them to convey a particular meaning. Further, if a court decision interprets a clause in a manner inconsistent with the parties’ intent, courts also assume that subsequent parties will readily and appropriately revise their contracts to reject that errant interpretation.  Our findings suggest, to the contrary, that the world of contract production and revision is much more complicated.

For important related research by other scholars that our research seeks to build on — including that by Robert Anderson, Jeffrey Manns, John Coates, John Coyle, and Mark Weidemaier — see here, here, here and here.

This post comes to us from professors Robert E. Scott at Columbia Law School, Stephen J. Choi at NYU School of Law, and G. Mitu Gulati at Duke University School of Law. It is based on their recent article, “Innovation Versus Encrustation: Agency Costs in Contract Reproduction,” available here.