The U.S. experienced an unprecedented number of home foreclosures during the Great Recession of 2007-2009. To limit defaults and deadweight losses, the government implemented various policies that reduced monthly payments by homeowners (i.e., Home Affordable Modification Program) and facilitated mortgage refinancing (i.e., Home Affordable Refinancing Program). These initiatives had modest success. An alternative policy proposal that was not implemented during the Great Recession would have allowed mortgage “cramdown” by judges as part of the Chapter 13 bankruptcy process. The proposal passed the House of Representatives but failed in the Senate. In these restructurings, the underwater portion of the mortgage is treated as unsecured debt and can be discharged during bankruptcy. In a new paper, we study the effects of bankruptcy discharge on borrowers who benefit from mortgage cramdown.

Chapter 13 bankruptcy allows debtors to restructure almost all types of debt except for loans on their principal residence. However, some bankruptcy courts discharged the underwater portion of the mortgage during bankruptcy between 1978 and 1993. In particular, these courts understood cramdown as a simple reclassification of the loan in bankruptcy. The main argument was that this exclusion of debt on the principal residence  was limited to the value of the collateral, whereas any negative equity could be classified as unsecured debt, and thus, was dischargeable through bankruptcy.

Under this cramdown approach, borrowers must continue to make the monthly mortgage payments following the original terms of the loans, but underwater borrowers benefit ecause the debt owed on the property is reduced. Cramdown thereby decreases the incentives for households to default on their properties and decreases the likelihood that households will be forced to move out of their homes. In June 1993, the U.S. Supreme Court prohibited cramdown in all states after ruling on the issue in Nobelman v. American Savings Bank.

To quantify the effects of bankruptcy discharge in cramdown courts, we compile a new dataset of district courts that allowed mortgage cramdown over the period from 1989 to 1993. Our sample contains bankruptcy records from 14,517 cases; 6,100 in cramdown courts and 8,417 in non-cramdown courts. This dataset comprises individual filer’s information such as name, address, and last four digits of the debtor’s social security number and case information such as chapter filed, filing date, court, office, outcome (i.e., discharged or dismissed), judge and trustee names, and debtor’s outcome such as foreclosure, sales, post-filing addresses, real property purchases, and mortality.

Our main results are summarized in Figure 1. It compares the impact of debt discharge on home foreclosures between cramdown and non-cramdown courts. The figure shows that a bankruptcy discharge in Chapter 13 in a cramdown court substantially reduces mortgage distress over the 10 years following the bankruptcy filing. For example, the foreclosure rate declines by 27 percentage points in cramdown courts over the first three years after the bankruptcy filing. In contrast, debt discharge is substantially less beneficial if courts cannot reduce debt for underwater homeowners. In these cases, three-year foreclosures decline by only 4 percentage points. Thus, given the substantial costs of foreclosure, cramdown has significant benefits for homeowners.

We also find that discharge in cramdown courts stabilizes living arrangements and other circumstances of households. For example, households are overall less likely to move, but when moving, they are more likely to move to neighborhoods with higher average income levels. 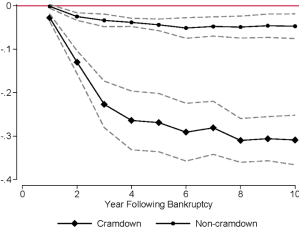 This paper comes to us from professors Jacelly Cespedes at the University of Minnesota, Carlos Parra at the Pontificia Universidad Catolica de Chile, and Clemens Sialm at the University of Texas at Austin and the NBER. It is based on their recent paper, “The Effect of Principal Reduction on Household Distress: Evidence from Mortgage Cramdown,” available here.