Facebook CEO Mark Zuckerberg’s wealth has increased by over $100 billion since 2004, but he has paid relatively little income tax. Why? Because of the “realization rule:” Zuckerberg has not sold—and thus “realized” the gains on—the great majority of his Facebook shares, so he’s not taxed.  The realization rule creates a host of problems, including huge revenue losses and inefficient investment incentives.  Indeed, the Senate Finance Committee Chair plans to introduce a bill to repeal the rule for liquid assets for rich taxpayers. In a new article, we explore public attitudes toward taxing unsold gains and find the public has strong intuitions that taxes should wait until sale or transfer.

It has long been understood that the realization rule creates a range of problems that violate each of the conventional tax policy principles of equity, efficiency, and simplicity.  In terms of equity, the realization rule causes huge sums to go untaxed among the rich. Repealing the realization rule just for liquid securities could raise $2 trillion in taxes—just from the top 1 percent of earners, if taxed at ordinary rates—over the next 10 years (Batchelder & Kamin 2019).  The realization rule also gives taxpayers an incentive to avoid selling assets or investing in assets like bonds that regularly produce current income, which is economically inefficient. Finally, the rule creates a host of collateral complexities in tax law like basis recovery rules and anti-abuse doctrines.

Given the range of problems created by the realization rule, its existence—at least, for many easy-to-value assets—is something of a mystery. For hard-to-value assets, there is a pragmatic case for the realization rule: It eases valuation and liquidity issues. But, for assets like publicly traded corporate stocks, valuation and recordkeeping are simple, and those who have gains can sell some of the appreciated stock, easily accessing the liquidity they need to pay the taxes they owe. While any change to the realization rule could of course create its own set of issues, many tax scholars are convinced that those are worth bearing given the tremendous costs of the rule.

Why then does the realization rule persist for such liquid assets in the U.S. and around the world? One leading explanation is that the public is averse to taxing unsold (or otherwise unrealized) gains in the value of assets, sometimes called “paper gains.” Judicial rulings have long appealed to this view. They argue that taxing unsold gains is unfair because the gains are not yet real, instead existing only on paper and potentially disappearing before the owner cashes in.  But we have little empirical evidence on what the public actually thinks about paper gains and the realization rule, much less why it has those attitudes.  This gap in knowledge is especially glaring in light of recent proposals to repeal the rule at the federal level and in some states. The goal of our new paper is to help rectify this basic ignorance about the psychology of the realization rule, given its huge implications for the ability of the government to tax capital through an income tax.

We conducted survey experiments with a provider of high-quality, demographically representative samples of Americans. In total, we have about 5,000 respondents. We ask about a variety of assets, but focus on publicly-traded stocks because they are a clear case where valuation and liquidity issues are relatively unimportant. In addition to the main control survey, we randomly assign some of our respondents to receive one of the seven persuasion treatments. These treatments provide various arguments in favor (or against) taxing unsold gains to test what arguments, if any, change respondents’ attitudes. In the control and the treatments, we also ask dozens of additional hypotheticals where we vary the tax policy or factual circumstances. Seeing how respondents’ support for taxing unsold gains changes in these questions allows us to gain greater understanding about what explains their attitudes.

Our analysis reveals three main findings. First, in our baseline question, three quarters of respondents prefer to wait to tax gains on publicly-traded stocks until sale rather than to tax unsold gains each year. This is shown in Figure 1. 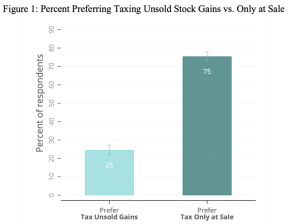 Though this opposition is strongest among those who are wealthier or own stocks, all demographic groups oppose taxing unsold gains by large margins. This opposition persists and is often strengthened when looking across a variety of other assets and policy framings. For example, surprisingly, even among those who do not own stock, nearly half prefer increasing ordinary tax rates on everyone, including themselves, to a tax on unsold stock gains. We also find similar attitudes reflected about unsold gains in the context of property taxation, where a series of popular tax revolts (most famously Proposition 13 in California) targeted taxes on paper gains. Likewise, in our surveys of law students in federal income tax courses, most remain opposed to taxing unsold stock gains, even after a semester learning about many of the problems of the realization rule. But a flip side is that there is surprisingly strong public support for taxing gains on assets at sale or transfer, including at death, in places where those gains are never taxed under current law.

Second, the persuasion treatments given to randomly selected participants show that, though arguments can shape people’s views here, our most important treatments only modestly increase support for taxing unsold gains. When randomly selected participants observe a policy debate composed of two videos explaining the pros and cons of taxing gains before sale, support increases from 25 percent (control) to 30 percent (treatment).  In addition, our treatment limiting taxes on unsold gains to the very richincreases support to only 34 percent.  This is true even as other tax policies targeted at the rich elicited broad support. Even after our most persuasive arguments in our “pro” treatment—which substantially increase support for taxing unsold gains— a considerable majority still opposes taxing unsold gains.

Third, we explore possible explanations for these attitudes, and find the strongest evidence for four:

1. Mental Accounting. In their everyday lives, people widely use “mental accounting” heuristics, under which they react differently to unsold gains than other ways of getting richer, like wages—apparently not regarding unsold gains or losses as fully “real” until sold. We show that those holding such views are considerably more likely to oppose taxing unsold stock gains, suggesting that mental accounting helps drive opposition to taxing unsold gains. For example, in one question, we told people that they had wages and unsold stock gains this year and told them to tithe (give 10 percent of their income to charity). Those who wished to tax gains only at sale were far more likely to ignore the unsold stock gains in their hypothetical giving. This is shown in Figure 7. 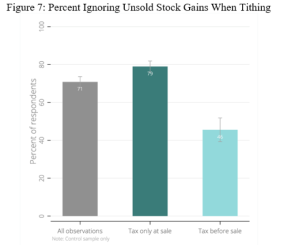 3. Complexity. Concerns about the complexity of taxing unsold gains are also a strong predictor of opposing such taxes.

4. Consumption. In the context of taxing capital income—particularly that arising from unsold gains—a sizable share of participants appear to actually wish to tax consumption, rather than income itself.

Our main goal with the project is descriptive: understanding empirically how the public thinks about taxing unsold gains—and how it would think if there were a public debate on the issue––gauged through the differing responses to our various proposed policies and the effects of the persuasion treatments given to randomly selected participants. A better understanding of attitudes about the realization rule could matter for at least three reasons—of course, knowing that any such measurement, while valuable, is imperfect. The first reason is explanatory. While the effect of public attitudes on policy outcomes is complex, since many other things influence such outcomes, these results suggest that public attitudes can help explain the persistence of the realization rule, despite its downsides.

A second reason is instructive. Understanding the widespread opposition to taxing unsold gains—without necessarily assuming that those attitudes are consistent or coherent—helps suggest ways of designing and framing policies that could be both palatable and workable. Our evidence does suggest that pro-tax arguments and policy tweaks sometimes shift attitudes, suggesting the possibility that the public’s initial opposition to taxing unsold gains could be overcome. But the overwhelming opposition to directly taxing unsold gains of individual taxpayers in nearly all of our many policy variants suggests this combination is not easy to find. As a result, it is worth considering policies that may achieve similar outcomes without directly taxing individuals on unsold gains. For example, policymakers could tax corporations, rather than individuals themselves, on gains in stock value or encourage the disbursement of dividends. We also suggest a range of policies that seem to fit with people’s intuitions as well as raise taxes from capital income—like taxing gains at death, upon the sale of a house, or raising the corporate tax rate. Third, though not our focus, the public’s attitudes may have normative weight on their own account; we remain agnostic here.

In sum, the realization rule is integral to how we do or don’t tax capital under the income tax.  One explanation for its persistence is public attitudes toward paper gains. We offer the first empirical evidence on attitudes toward taxing unsold gains and find a strong preference for taxing only at sale.  In the full paper, we explore the implications of this preference in much greater detail, but viewed at the highest level, we provide evidence of a significant barrier to taxing capital through an income tax—a barrier that does not appear in our data to apply to labor income.

This post comes to us from professors Zachary D. Liscow at Yale Law School and Edward G. Fox at the University of Michigan Law School. It is based on their recent paper, “The Psychology of Taxing Capital Income: Evidence from a Survey Experiment on the Realization Rule,” available here.