Over the past several decades, researchers have taken a serious look at the quality of CEO succession planning at publicly traded corporations. The results have not been encouraging. The evidence suggests that many companies are slow to terminate an under-performing CEO, are caught flat-footed in the event of a sudden CEO departure, and are often unprepared to identify a viable or permanent successor.

The research, however, is not without its shortcomings. A central challenge facing researchers is that it is very difficult for outside observers to determine whether the board in fact terminated the CEO. Rarely does a board explicitly state that the CEO was fired. Instead, shareholders are much more likely to hear that a CEO retired or left to pursue other opportunities, to spend more time with family, or for personal reasons. From statements such as these, outsiders must read between the lines before categorizing terminations as voluntary or involuntary, and for researchers dealing with hundreds or thousands of turnover events, clear-cut determinations are difficult.

In a recent paper, we examine CEO turnover and succession using a unique and highly comprehensive data set from the company known as exechange. Our sample includes 1,399 CEO turnover events at Russell 3000 companies over the five-year period from January 1, 2017 to December 31, 2021. Exechange applies a novel methodology that evaluates the circumstances surrounding a CEO departure to determine the degree to which it might be voluntary or involuntary (called the Push-Out Score). With this data, we are able to provide new statistics on CEO departures and fresh analysis of CEO turnover to arrive at a more current assessment of the quality of succession planning among publicly traded U.S. companies.

The premise behind the Push-Out Score is that CEO departures are not necessarily black-and-white decisions. Instead, the Push-Out Score comprises a scale of 0 to 10 to reflect that departure decisions often fall on a spectrum. A score of 0 indicates that it is “not at all likely” the CEO was terminated, and a score of 10 indicates termination is “evident.” Numbers between these reflect the extent to which circumstantial evidence indicates the CEO was pressured to leave.[1]

First, we examine the distribution of Push-Out Scores. We see they are somewhat evenly distributed across the scale. This demonstrates the inherent difficulty of categorizing CEO departure decisions as voluntary or involuntary and shows how many turnover events appear to fall somewhere in the middle. Of note, high scores are slightly more prevalent than low scores (see Figure 1). 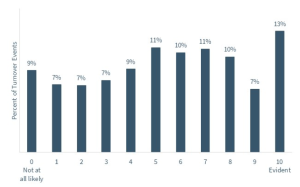 This is unexpected. Most traditional research finds that CEOs terminations are less frequent than voluntary resignations, whereas Push-Out Scores suggest that terminations are more frequent. Boards might be more willing to terminate a CEO than researchers have historically recognized.

Next, we look at the official reason companies provide in press releases to explain CEO departures and the relation between these and Push-Out Scores. The most frequent explanation companies provide is that the CEO “retired,” followed by “resigned,” and “stepped down.” Other descriptions are “left, departed, or no longer serve at the company;” “terminated, removed, or separated from the company;” and “transitioned” leadership (see Figure 2). 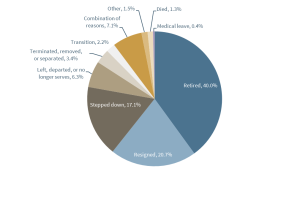 Source: Data from exechange. Analysis by the authors.

All of these phrases – with the exception of termination language – are associated with a range of Push-Out Scores. Only the phrases “terminated, removed, or separated from the company” are clearly indicative of involuntary departure (see Figure 3). 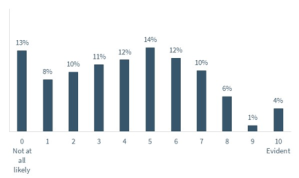 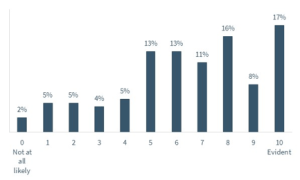 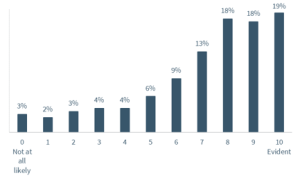 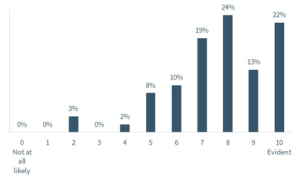 CEO “Terminated, Removed, or Separated from the Company” 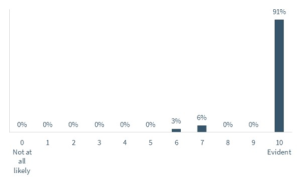 Source: Data from exechange. Analysis by the authors.

These patterns underscore the ambiguity of language used to describe CEO departures and demonstrate why outsiders have difficulty relying on company-provided explanations to determine whether a CEO was fired or resigned.

Sensitivity of Turnover to Performance

We find a strong association between a lower stock price and a greater likelihood that a CEO is pressured to leave. This indicates that Push-Out Scores provide informative assessments of whether a termination event is involuntary. It also indicates that boards might be more likely to hold CEOs accountable for performance than prior studies suggest (see Figure 4). 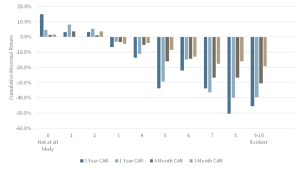 Source: Data from exechange and Center for Research in Securities Pricing (CRSP). Analysis by the authors. Push-Out Scores modified by the authors to remove recent stock-price performance as an input variable. 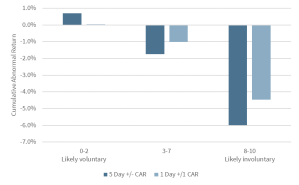 Source: Data from exechange and Center for Research in Securities Pricing (CRSP). Analysis by the authors.

Preparedness to Name a Successor

Here, we examine the degree to which companies are prepared to name a permanent successor and whether forced terminations (high Push-Out Scores) are associated with lower levels of preparedness. 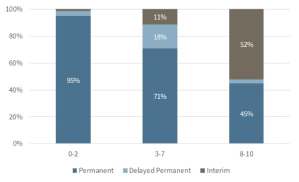 This suggests that most companies that name an interim successor do so because the CEO was terminated and not because the CEO resigned unexpectedly. It also suggests that boards in these situations are unprepared with a long-term succession plan, despite the fact that the board precipitated the turnover event.

Lastly, we study the stock-price performance of successors by Push-Out Score and by type of successor. We find that, when the successor is chosen from the board, the announcement generally prompts a  lower stock price than does an announcement of internal and external successors and that board successors exhibit worse three-month and six-month returns following their appointment.

[1] For a more detailed discussion of the Push-Out Score methodology, see https://exechange.com/.

This post comes to us from David F. Larcker and Brian Tayan at Stanford University Graduate School of Business and Edward M. Watts at Yale School of Management. It is based on their recent article, “Firing and Hiring the CEO: What Does CEO Turnover Data Tell Us About Succession Planning?” available here.