Stock-option backdating, the practice of changing the reported date of a stock-option grant to an earlier date, proliferated in the 1990s and early 2000s, with nearly one-third of public corporations engaging in it, according to some estimates (Heron and Lie, 2009). The discovery of it left many to wonder how such a practice could spread undetected so widely, for so long. Many believe it spread through social ties among executives, but that explanation seems lacking. Most executives who backdated were not versed in accounting rules, and the practice required falsifying several separate, formal documents – including the firm’s quarterly and annual reports. It is unlikely that so many executives thought that reporting false information to regulators and investors was a legitimate practice. A more likely explanation is that professional service firms acted for as hubs for spreading the practice. This prompts the question: What role did auditors play in facilitating the diffusion of stock-option backdating to their clients?

In a new article, I use data on all executive stock-option grants between 1996 and 2005 to explore how this misconduct spread. I also examine whether ties to executives who engaged in backdating in the past, or ties to local offices of auditors with clients who backdated, increased the likelihood of such an event. The main idea is that practices that are “liminal” – not (yet) outlawed, but clearly close to the line separating right from wrong – spread locally, from a backdating peer or from an auditor whose other clients have already backdated their options. Indeed, I find that there is no evidence that backdating spread “globally,” from one local office to clients of a different local office, even if the offices are part of the same audit firm. In the remainder of the paper, I analyze how the increased attention to reporting irregularities following Sarbanes-Oxley changed the role of local offices of auditors – from spreading the practice to extinguishing it.

The Rise and Fall of Stock-Option Backdating

In the early 1990s, stock options as executive compensation were a common practice supported by two U.S. tax and accounting codes. The APB 25 revision of the 1972 accounting rules allowed companies to not report stock options issued to executives as an expense if the option matched the company’s trading price. Stock options were a way around tax code provision 162(m) of 1994, which placed a heavier tax burden on salaries that exceeded $1 million.

The two rulings made stock-option awards more appealing because of the tax breaks. And because those option grants were often reported several weeks after they occurred, the timing made it easy for executives (possibly under the guidance of auditors) to change the date on the grant to coincide with a day that had a lower stock price, circumventing the tax implications and reporting requirements.

In July 2002, the Sarbanes-Oxley Act (SOX) required more transparency into stock-option awards, as part of legislation aimed at increasing transparency and accountability of financial reporting in the wake of multiple large accounting scandals in the early 2000’s. SOX did not mention option backdating, but it did require that all stock-option grants be reported within two days of their grant date, meaning that backdating would unambiguously violate an additional, clearly stated legal provision. What’s more, the string of accounting scandals that culminated in SOX clearly signaled that legislators and regulators view reporting irregularities unfavorably, effectively reducing the likelihood that backdating executives could get away with it.

Four years later, in March 2006, The Wall Street Journal (WSJ) published an investigative piece chronicling the timing of stock-option awards at six large companies. The results of the investigation revealed executives were receiving stock options on dates more favorable than chance alone would predict. The article sparked an investigation by the U.S. Securities and Exchange Commission (SEC) and the U.S. Department of Justice (DoJ), which officially ruled that backdating stock options violated several sections of the Securities Act and was illegal, unless certain conditions, which would essentially make the practice useless, were met.

By the end of 2007, 141 companies had been investigated, according to he WSJ, and most of them were punished by the SEC. Few executives admitted wrongdoing, though, and  many tried to shift blame to financial  officers and directly named auditors for implementing the strategy of backdating. As gatekeepers for shareholders and experts advising firm management, auditors are privy to the type of financial, confidential information that positions them to learn of liminal reporting practices and the most effective way to spread them to other clients.

In my analysis, I find evidence consistent with the idea that backdating spread within the client pools of local offices of auditors. For example, adoption of backdating among the client pool of one of Arthur Andersen’s local offices would exhibit an upward sloping s-curve from 1992 to 2002, while at the same time, the adoption curve for clients of a different office of Arthur Andresen would be downward sloping. This suggests that experts’ opinions about the appropriateness of backdating was largely determined within a local office.

This process creates local clusters in which liminal practices either spread widely or not at all, as the local advice helps them navigate those blurred-lined areas to circumvent rules. Interestingly, the process of diffusion is reversed as regulation tightens. Even local offices that have many backdating clients in 2001 start extinguishing the practice among their clients with the passage of SOX, implying that, as the legitimacy of a practice is threatened, experts facilitate its abandonment. Finally, once backdating was made clearly illegal and illegitimate through means of public discourse and awareness by stakeholders, the media, and eventually agencies such as the SEC and the DoJ, the practice is eradicated.

Key Findings Point to the Experts 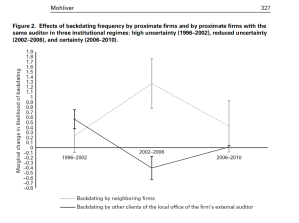 The evidence supports two important conclusions. First, professional experts play a role in spreading compromising governance practices, and, contrary to the findings of most research, the relevant unit of analysis is local office rather than an auditor’s head office. Second, professional experts are quick to respond to regulatory changes based on opinions of appropriateness formed from societal signals.

Experts are better at judging where the line separating right from wrong lies, and where it lies when regulations are about to change and then do change. With that ability, those experts can facilitate or, crucially, inhibit widespread misconduct.

This post comes to us from Aharon Mohliver, an assistant professor of strategy and entrepreneurship at London Business School. It is based on his article, “How Misconduct Spreads: Auditors’ Role in the Diffusion of Stock-option Backdating,” available here.