In a new paper, we examine how the visibility of executives affects the value of their firms. We define executive visibility as the ubiquity of the executive’s public profile, separate from that of the firm. Communications and public relations professionals increasingly advocate for executive visibility to make the executive appear more relatable, personable, and trustworthy to stakeholders.[1] A global survey of 1,700 non-CEO executives conducted by the communications agency Weber Shandwick (2020) found that 81 percent believe their CEOs should be personally visible as the face of their company.[2] In short, the executive should be not only a leader but also an ambassador for the firm.

Yet building visibility is costly for the executive, requiring time and imposing a psychic price. How investors will respond to visibility is unclear. More precisely, it is unclear whether investors, faced with decision-making under uncertainty, perceive executive visibility as a signal for true, unobservable, executive ability. Spence (2002) describes signals as “things one does that are visible and that are in part designed to communicate”.[3] On one hand, the highly able executive might be more visible by virtue of having more accomplishments, connections, and other attributes. On the other hand, the highly able executive, presented with a larger set of opportunities, might find the opportunity cost of spending time on building visibility too high and turn her focus elsewhere.

Why do we look at Special Purpose Acquisition Companies?

Executives are often intricately tied to the firms they work for, making it an empirical challenge to separate the effect of an individual executive from that of a firm. For example, one could argue that high-performing firms can attract more visible, high-profile CEOs than poorly performing firms can. Alternatively, one could also argue that firms in crises are precisely the ones that seek out the leadership of high-profile CEOs. To mitigate these empirical issues, we use special purpose acquisition companies (SPACs) as a unique laboratory.

A SPAC is a publicly listed shell company created for the sole purpose of acquiring another company, in turn taking the target public. At the conception and initial public offering (IPO) of a SPAC, executive branding is all that is offered, as the SPAC has neither a product nor an operating history. Following the IPO, the SPAC’s executive team has a limited period – generally from 18 to 24 months – to find a suitable target and complete an acquisition. The SPAC thus relies on the pull of its executive team to attract IPO investment and potential acquisition targets. The special attributes of the SPAC make it the perfect laboratory to examine the effect of executive visibility while mitigating the various research design issues that usually plague a study of this question.

How do we measure executive visibility?

We measure executive visibility using a host of hand-collected data. When considering the factors that would go into our measure of visibility, we sought to select those that are observable to the public and alterable by the executive, i.e., factors that could be potentially considered as signals, as defined by Spence (2002). Our measure is composed of three components:

In our analyses, we control for the executive’s education, experience (proxied for by age, board experience, prior SPAC experience, among others), and level of social connectivity (network) to other executives.

What is the value of executive visibility?

Our analyses suggest that visibility indeed plays a role in attracting investors to an IPO, despite the SPAC essentially being an empty company at the time. On average, the most visible executive raises 35.8 percent more funds and closes the IPO in a third less time than the least visible executive does. We also find evidence that high visibility executives are rewarded during the acquisition announcement. Controlling for deal and target characteristics, a one-standard deviation increase in executive visibility is associated with a 2.9 percent increase in the cumulative abnormal return (CAR) around the acquisition announcement.

Digging deeper into visibility, we find that fame and press coverage significantly affect IPO size, whereas social media does not. This is unsurprising as the bulk of the investors at a SPAC’s IPO are institutional investors, which are more likely to have direct access to management and thus less likely to be influenced by social media.[5] By contrast, social media drives the relationship between visibility and above-average returns at the acquisition announcement. This is when retail investors typically start trading in the SPAC, since retail investors usually have restricted access to IPO shares, and there is little trading during the period between the IPO and the acquisition announcement.

Using the method proposed by Boehmer et al. (2021), we measure order imbalances separately for institutional and retail investors and compare the trading behavior of the two groups.[6] Our results are best illustrated with the figures below. Figure 1 depicts the average order imbalance of institutional investors – over a window that begins two weeks prior to the acquisition announcement date and ends on the average completion date – for different levels of visibility, with 4 representing the group of the most visible executives. Figure 2 (3) depicts the same but for large (small) retail investors. These figures, as well as further empirical multivariate analyses, suggest that:

Altogether, our findings suggest that investors reward executive visibility. Visible executives raise more money, requiring less time to do so, and enjoy more net buying activity from both retail and institutional investors. However, the rewards of visibility are not equally shared; the executive and certain investors with access to early investment opportunities are rewarded, while other investors are not. 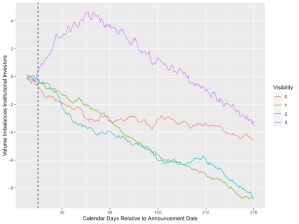 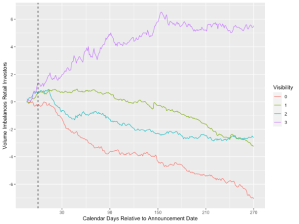 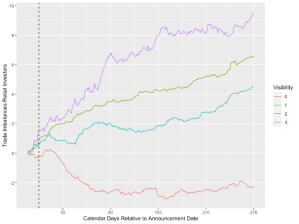 [4] Google Knowledge Panels are information boxes that appear to the side of the search result, providing a snapshot of the entity being searched.

This post comes to us from Lora Dimitrova at the University of Exeter and Margaret Fong at HEC Montreal. It is based on their recent article, “The Value of Executive Visibility,” available here.