First-year law students typically learn that the terms of a contract represent a snapshot of the parties’ mutual intent, captured at the “magic moment” of contract formation. In reality, however, contractual sausage making is far messier than this idealized account admits. Even sophisticated negotiators can (and do) fall prey to inattention, bad planning, poor information, slothful mimicry, bad negotiating or decision-making skills, and more. And when they do, the contract terms they adopt may diverge from shared intent – sometimes substantially. In short, contracts are often the products of their environments, including political constraints, economic exigencies, and the inherent limitations of those who structure them.

While these observations are hardly new, scholars and practitioners still lack a coherent, general theory that captures how evolving institutional and economic contexts of real-world negotiations shape contractual architecture over time. The absence of such a theory significantly hamstrings the now-burgeoning empirical literature on transactional practices: Without a foundational theory to help frame inquiries, formulate testable hypotheses, and interpret results, empirical research on contracts largely becomes an exercise in “counting things” – typically, the incidence of a discrete contract term in a particular market over time – with little analytic mooring to help one assess and evaluate emerging trends. (We ourselves confronted this challenge in our prior work on how mergers and acquisitions (M&A) contracting has evolved during the COVID-19 pandemic, featured here, here, and here.) The lack of a general theory, moreover, limits one’s ability to answer some of the most foundational – and understudied – empirical puzzles in contract evolution. Casual empiricism suggests, for instance, that the innovation of contract terms may differ from one market to the next. Moreover, even within the same class of agreement, different terms frequently appear to reflect distinct evolutionary trajectories.

In our new paper, “Contractual Evolution” (forthcoming in the University of Chicago Law Review), we begin to bridge the gap between theoretical and empirical accounts of contracting practices and trends. From a theoretical perspective, our article develops a formal dynamic model of contract negotiations in which deal terms evolve endogenously over time as a byproduct of several key features, including efficiency concerns, information quality, and sequential learning by negotiators. We demonstrate how each of these factors contributes to the diffusion of contractual provisions, affecting their speed, direction, and overall desirability. Our model conceives of these evolutionary paths as growing out of sequential negotiations over facially similar transactions, each intermediated by a community of repeat-play transactional attorneys. Filtered through lawyer networks and shared experiences, evolutionary patterns of term diffusion can emerge in both desirable and undesirable directions. In some settings, contracting communities quickly converge on value maximization for each deal. In others, the adoption of terms tends to resemble information cascades, wherein negotiators categorically mimic “market” practices, disregarding the specifics of the deal in front of them. In yet others, contracting practice may stubbornly resist change even in the face of material economic shocks that would seem to warrant it. We employ Monte Carlo simulations of our model to illustrate several of these canonical paths, and we further show how sudden regime shocks (such as a major statutory reform) or infusions of market information (such as the ABA’s well-known M&A Deal Points Studies) can perturb those paths. We also highlight several constructive extensions of our framework, including how the study of contract negotiation unfolds when price cannot easily be adjusted, and how to think about term evolution in the presence of non-Bayesian cognitive and behavioral biases.

Having developed and illustrated these insights in a theoretical setting, our paper then takes a sharp empirical turn using the M&A market as our Petri dish. Deploying a hand-collected dataset of more than 2,100 merger agreements executed over two decades, we code up a wide variety of contract features, including pandemic-related “material adverse effect” (MAE) clauses, #MeToo provisions, CFIUS conditions, reverse termination fees, top-up options, and choice of law or forum provisions. We then track patterns of adoption for these provisions, comparing each against the canonical paths predicted by our model.  Our analysis reveals highly heterogeneous diffusion patterns, which in turn suggest that there is not a “one size fits all” trajectory for contractual evolution even within the same market; rather, the constituent forces affecting term evolution appear to vary appreciably across different provisions. For example, while some (such as pandemic carve-outs to MAEs and #MeToo provisions) bear the markers of rapid cascades, others (such as CFIUS provisions and top-ups) appear relatively tailored to the factual environment surrounding each particular deal.

Beyond its core topical focus, our paper also aspires to make a durable contribution to the stockpile of empirical resources available to researchers who study M&A practices. To facilitate replication efforts and to catalyze future extensions, we are making both the raw textual corpus and the hand-labeled data sets available as an open-source resource to all, subject to a few modest conditions on acknowledgment and accessibility of derivative data sets. (Those interested in accessing these data sets can learn more at www.jennejohnnyarkotalley.com.) In taking this step, we join with authors of other recent studies in underscoring the importance of publicly available data to empirical legal scholarship, and we consider our corpus and data to be among the most comprehensive and accessible open-source resources available. We invite others interested in this area to make use of it, to help us improve it, and to contribute more generally to the scholarly community’s understanding of private ordering.

As we were completing our draft this article, we became aware of an interesting and important contemporaneous paper by Guhan Subramanian and Caley Petrucci (S&P) on a related topic: analyzing empirical trends in pandemic-related carve-outs and ordinary course covenants in several years of M&A agreements. Unlike our paper, S&P do not develop a theoretical account of contractual evolution, concentrating instead on tabulating and summarizing several COVID-related contracting trends.  But like our paper, S&P unveil a hand-collected database taken from several years’ worth of M&A deal data, which they describe as the “most comprehensive, accurate, and detailed database of such deal terms that currently exists.” Because their database remains proprietary, we cannot assess that claim directly; but we can offer a comparison of our data set’s overall coverage side-by-side with S&P’s: 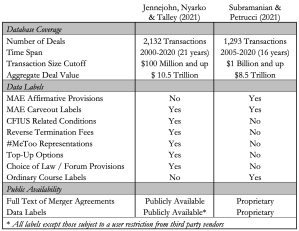 We leave it to readers to evaluate which resource is best adapted for their individual needs. (In our view, each has relative strengths.) That said, the far more exciting point for empirical legal scholarship is the emergence of not one but two new data sets to study contractual practices and trends in M&A. These new contributions are a healthy development for the field as a whole, and they have the potential to serve as scaffolds from which future scholars might build. We encourage Subramanian and Petrucci (and other empirically-minded academic researchers) to join with us in eventually opening up public access to these foundational data resources. More generally, we hope that making our data available now will set a good example, catalyze collaborative research, and provide a helpful resource that empirically-minded students, scholars, practitioners, and judges can use right away. And that is the kind of evolution we all should welcome.

This post comes to us from professors Matthew Jennejohn at Brigham Young University Law School, Julian Nyarko at Stanford Law School, and Eric Talley at Columbia Law School. It is based on their recent article, “Contractual Evolution,” available here.